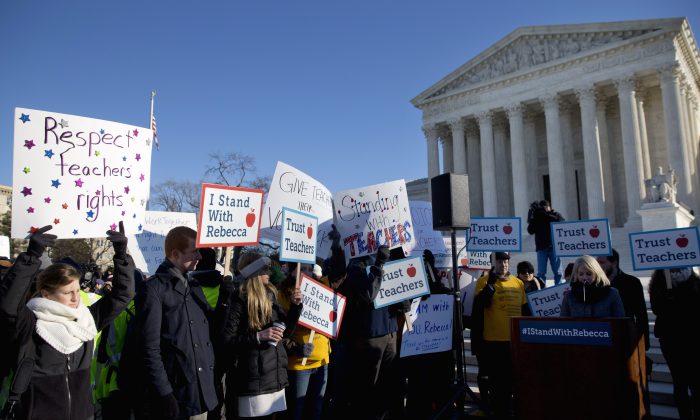 People participate in a rally at the Supreme Court in Washington, D.C., on Jan. 11, 2016, as the court heard arguments in the 'Friedrichs v. California Teachers Association' case. The justices were to hear arguments in a case that challenges the right of public-employee unions to collect fees from teachers, firefighters and other state and local government workers who choose not to become members. (AP Photo/Jacquelyn Martin)
US News

America’s largest labor union is the National Education Association (NEA), organized in 1906 with a congressional charter “to elevate the character and advance the interests of the profession of teaching; and to promote the cause of education in the United States.”

Inadequate teacher pay has long been a staple of NEA rhetoric and advocacy, as seen in this April 29, 2019, statement by then-NEA President Lily Eskelsen Garcia:

“Across the nation, educator pay continues to erode, expanding the large pay gap between what teachers earn and what similarly educated and experienced professionals in other fields earn.

“Educators don’t do this work to get rich, they do this work because they believe in students. But their pay is not commensurate with the dedication and expertise they bring to the profession.”

Given the NEA’s frequently professed concerns about low teacher pay, critics wonder why the union spends so little of the $377 million it received mostly in dues paid by 2.9 million members in 2021 on “representational activities”—that is, bargaining for better pay and working conditions for rank-and-file classroom teachers.

According to its latest LM2 report to the Department of Labor, the NEA spent only $32 million, or 8.5 percent of its total dues revenue, on those representational activities.

Calculated as a percentage of NEA total revenue from all sources of $588 million, the $32 million represents only 5.4 percent. The $588 million figure includes the $194 million the NEA received through the sale of “investments and fixed assets.”

The NEA didn’t respond by press time to The Epoch Times’ request for an interview with a spokesman regarding the data it reported on its LM2. All labor unions are required to submit the LM2, which is a detailed picture of revenue, assets, and spending, to the Labor Department annually.

Digging deeper into the NEA’s LM2 reveals a union that pays lavish salaries to hundreds of its more than 1,900 employees, especially among those working at the national headquarters in Washington.

There are 344 NEA employees being paid more than $100,000 annually, nearly one in every five; many of the 344 make twice or three times the national average teacher salary.

Another 45 NEA employees are paid more than $200,000 annually, with many of those receiving as much as four times the national average teacher salary.

Then, there are the high-dollar compensation packages the NEA provides to its top leadership, which are eye-popping even in a town known for extraordinarily highly paid union, corporate, and nonprofit executives:

Critics of the NEA also point to the imbalance between how much the union spends in the form of campaign cash to Democratic candidates, especially those running for Congress, compared to the organization’s representational activities.

According to the 2021 LM2, the NEA spent $65 million on political campaigns and lobbying, twice the $32 million on representational activities. Fully 94 percent of the NEA’s campaign contributions went to Democrats, while 85 percent, or $5.1 million, of the union’s independent expenditures in 2020 were against Republicans.

Asked about the extremely generous salaries paid to NEA employees, National Right to Work Committee President Mark Mix told The Epoch Times that “it is good to be a union official, particularly when you are granted special privileges to impose your so-called ‘representation’ on your ‘brothers and sisters’ in order for them to keep their jobs and support their families.”

Equally skeptical was Virginia Gentles, director of the Education Freedom Center of Independent Women’s Voices, who told The Epoch Times “the teachers union empire needs to be dismantled” because it works against the interest of teachers.

“Rather than advocating for increased salaries for teachers, union leaders lobby for more federal and state funding so school districts will hire more dues-paying members, many of whom aren’t actually teachers,” she said.

“Unfortunately, the unions have no interest in increasing teacher salaries; union leaders are just focused on increasing membership and collecting dues to spend on political campaigns and union leaders’ already-high salaries. Teachers union leaders are self-serving and callous to the needs of individual teachers. Parents shouldn’t have to feel powerless and teachers shouldn’t feel hopeless anymore.”

Similarly, the Heritage Foundation’s Jonathan Butcher told The Epoch Times the basic issue posed by the NEA’s LM2 data is whether the union’s leaders are representing the best interests of members.

“It’s common for school administrators—and interest-group employees who claim to represent teachers—to earn more than teachers,” Butcher said. “Given the amount of misspending and political lobbying that may not represent the interests of individual teachers, educators should be asking whether unions are really operating in a way that protects their jobs and improves their working conditions.”