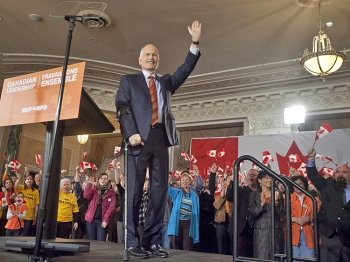 New Democratic Party leader Jack Layton waves during NDP's campaign kickoff event at the Chateau Laurier in Ottawa, Canada, on March 26. The latest poll released Wednesday by Forum Research showed that NDP was closing in on the front running Conservatives with 31 percent support compared to 34 percent for the Tories. (Geoff Robins/AFP/Getty Images)
US

TORONTO—Long dismissed as the party that would never rule, the NDP are surging in the polls and poised to change the dynamic of democracy in Canada.

Though previous elections have seen the NDP get a bump in the polls that melted away just before voters cast their ballots, there hasn’t been a showing as consistent as this.

The latest poll released Wednesday by Forum Research showed Jack Layton’s New Democrats were closing in on the front running Conservatives with 31 percent support compared to 34 percent for the Tories.

If that carries through to the ballot box, the orange team would scoop 108 seats compared to 37 in 2008. The Tories would miss their majority with only 137 seats and the Liberals would take 60. The Bloc Quebecois would be decimated with only three representatives.

The surge comes as the Liberals struggle to connect with voters and Conservative Leader Stephen Harper loses the edge he once had into majority territory. The Liberals are responding by framing the NDP as a protest vote by a party that has never ruled and has an unpractical platform.

Bob Rae, Liberal incumbent for Toronto-Centre, released a video attacking Layton’s pledge to get 1,200 new doctors and 6,000 nurses as impractical, saying Layton promised to achieve it in 100 days rather than the 10-year time frame actually stated in the NDP platform.

While the shift toward a national party has been seen as a welcome change by federalists in Quebec—where the NDP has seen its greatest jump—La Belle Province is known to flirt with national parties before returning to the BQ on election day.

The NDP, previously all but absent from Quebec, have previously scored just two seats in the province, with only Thomas Mulcair representing a Quebec riding after the last election. The party has struggled to field a slate of candidates in the province, and recently encountered some controversy when it emerged that one candidate was currently vacationing in Las Vegas.

Although running in the Berthier-Maskinongé riding, Quebec, Ruth Ellen Brosseau lives in Ottawa and works at Oliver’s Pub on the Carleton University campus. Nothing in the 65-word description on her NDP website references any political interest, though it does describe her as having a passion for rescuing and rehabilitating injured animals while working as an assistant manager at a restaurant.

Rae and fellow liberal Ujjal Dosanjh have tried to use their NDP history to argue against the party. Both served as NDP provincial leaders; Rae was premier of Ontario from 1990 to 1995, and Dosanjh was premier of British Columbia from 1999 to 2001.

The pair attacked Layton’s platform as unrealistic, while their leader Michael Ignatieff, a relative newcomer to politics, argued the NDP does not have the team or experience to govern.

Both the Liberals and Conservatives have launched attack ads targeting the NDP, while Layton’s own ads tend towards more positive messages regarding the party’s platform.