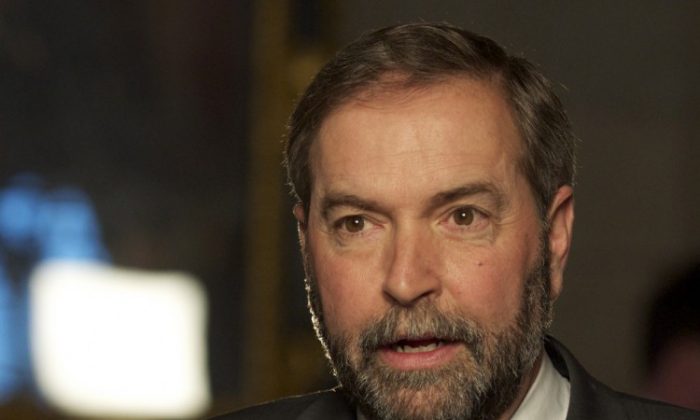 Newly anointed NDP leader Thomas Mulcair speaks with reporters after his first day in Parliament. With the looming prospect of Tory attack ads, the NDP are prepared to defend the image of their leader. (Matthew Little/The Epoch Times)
US

NDP Leader Won’t Be Defined Without a Fight

“Unlike those two previous examples, Mulcair is a seasoned political pro,” said Graves

“He seems to have a fair level of toughness. The Tory attacks on [former PM Jean] Chrétien as ‘yesterday’s man’ backfired. It’s too early to say but I think Mulcair will not be a docile or easy target.”

The Tory attack machine launched into action quickly, with an email to reporters soon after Mulcair’s coronation in Toronto giving a preview of what is likely to come.

“Thomas Mulcair is an opportunist whose high-tax agenda, blind ambition, and divisive personality would put Canadian families and their jobs at risk,” reads a statement from Conservative spokesperson Fred DeLorey.

“Mulcair has said he would bring back a risky, job-killing carbon tax which would raise the price of everything—even though Canadians overwhelmingly rejected carbon taxes,” it continued.

Prime Minister Stephen Harper countered that tone slightly by congratulating Mulcair from Tokyo where the PM also announced the launch of free trade negotiations between Canada and Japan.

Graves questioned the line of attack the Tories took, suggesting it did not seem as well-thought-out as he would have expected.

“Calling a career politician an ‘opportunist’ and displaying ‘blind ambition’ for successfully seeking leadership of his party and winning it clearly in a fair and democratic manner seems a little over the top.”

Graves said running for the NDP leadership and winning is little different from what Harper himself did.

But while Harper united the right, Mulcair looks to have already divided the left, at least in some quarters, and it may be that factor the Tories hope to draw on.

Mulcair came under attack by party elder and former NDP leader Ed Broadbent, who said Mulcair’s plans to move the party towards the centre could cause it to disappear.

Broadbent also said Mulcair took undue credit for the NDP’s breakthrough in Quebec in the 2011 election. Mulcair was the first NDP MP in the province after winning a by-election in Outremont in 2007.

“I am guessing that they feel the Broadbent salvo and the general notion that he will trade in NDP principles in a rush to the centre is something they can capitalize on,” said Graves.

Whether or not Canadians are concerned about a divisive NDP leader is hard to read, but Graves was doubtful that the Tory attack on Mulcair’s support for a carbon tax would gain traction.

He said his firm’s research shows that Canadians favour a carbon tax “as the most direct and fair method for dealing with climate change.”

Reading the 2008 election—where a key plank of Dion’s platform was the “Green Shift,” a carbon tax/social spending program—as an overwhelming rejection of a carbon tax is incorrect, he said.

Graves suggested that the Tories need to hone their message for it to gain traction.

“I don’t think it was very sophisticated but I think I can see where they are going with it.”

NDP is working on branding ads to define Mulcair and pre-empt the inevitable Tory attacks, says press secretary Karl Belanger, but details of the campaign are still under wraps.