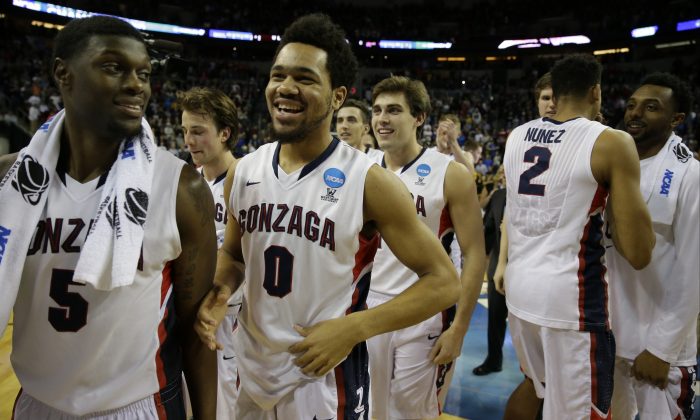 Gonzaga players including Silas Melson (0) celebrate after they beat Iowa 66-53 in an NCAA tournament college basketball game in the Round of 32, Sunday, March 22, 2015, in Seattle. (AP Photo/Ted S. Warren)
College Sports

The 2015 NCAA tournament is well underway, with a several day break before the next round of action.

The Sweet Sixteen bracket and schedule is set with some surprising teams making the cut and others shockingly being sent home early.

No. 8 North Carolina State stunned No. 1 Villanova, but the distinction of being the highest seed left in the tournament belongs to No. 11 UCLA, which knocked off No. 6 SMU before taking down No. 14 UAB.

Two other huge upsets in the third round saw two No. 2 seeds–Kansas and Virginia–sent home, courtesy of No. 7 seeds Wichita State and Michigan State.

After the frenetic weekend, the teams that survived the initial rounds get a well-deserved break before action starts again on Thursday night into Friday night.

Teams that make it to the Elite Eight get only a day of rest before the games on Saturday and Sunday.

The National Championship is slated for Monday, April 6.

See a full Sweet 16 schedule below.