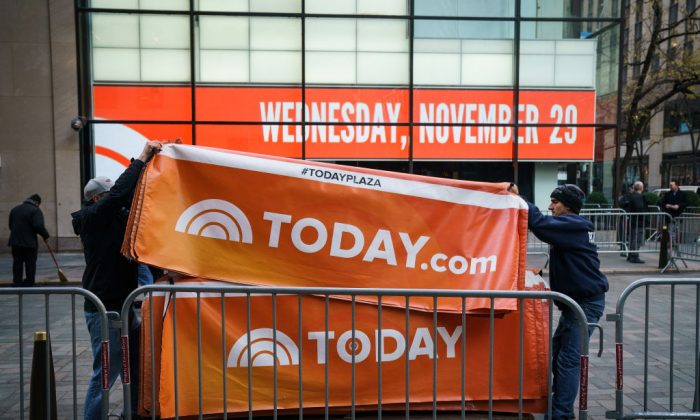 Workers break down the outside portrait of the set of NBC's "Today" show, Nov. 29, 2017, in New York City. It was announced that long time "Today" show host Matt Lauer had been fired for sexual misconduct. (Drew Angerer/Getty Images)
US News

Hoda Kotb will be the permanent replacement for Lauer after he was let go at the end of November 2017. She will host alongside current co-host Savannah Guthrie.

“It’s 2018 and we are kicking off the year right because Hoda is officially the co-anchor of ‘Today,'” Guthrie said on Tuesday, Jan 2. “This has to be the most popular decision NBC News have ever made and I’m so thrilled.”

Kotb had already been behind the anchor desk of the “Today” show as a temporary replacement, NBC News reported.

“I am pinching myself,” Kotb said. “I think we should send some medics to Alexandria, Virginia, where my mom has likely fainted after hearing the open of that show.”

NBC News Chairman Andrew Lack said in an email that Kotb has “seamlessly stepped” into the position, and with Guthrie, “quickly hit the ground running.”

Kotb has been co-hosting the fourth hour of the show with Kathie Lee Gifford since 2008. Lack also said that she would continue in that role as well, according to NBC News.

Lauer was recently spotted on Saturday, Dec. 23, with his now estranged wife and former model Annette Roque with their 14-year-old daughter, Romy.

Roque reportedly did not have a wedding ring on as the trio were seen together on a horse farm they own in Sag Habor New York.

Other journalists flocked to Twitter to congratulate Kotb in her new role.

Congratulations @hodakotb Just officially named new co-host of @TODAYshow along side @SavannahGuthrie What a great team to wake up to!

So happy for my dear friend @hodakotb !! Congratulations on being named the new Co Anchor of @TODAYshow !! Nobody does it better!!

Earlier, Roque’s father told reporters his daughter had ditched her wedding ring and was planning to divorce the disgraced former NBC anchor, who was fired from the network for sexual misconduct in the workplace.