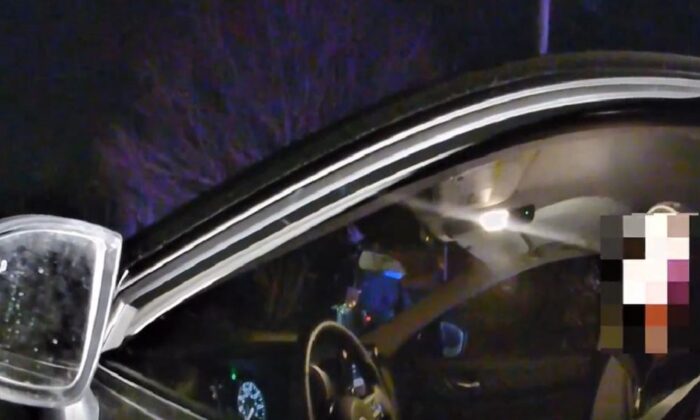 In this image from body camera video, NBC producer James J. Morrison is seen speaking to police officers in Kenosha, Wis., on Nov. 17, 2021. (The Epoch Times via Kenosha Police Department)
US News

A man who was stopped while following a bus carrying Kyle Rittenhouse trial jurors last month told police officers that he was ordered to do so by his superiors at NBC News and signaled the goal was to learn where the jurors lived, according to newly released body camera footage and a police report.

A Kenosha, Wisconsin, police officer witnessed James Joseph Morrison of Atlanta on Nov. 17 waiting for the jurors to get onto the bus and then following the vehicle after it pulled out of the parking lot.

Morrison stalked the bus for nearly five miles, according to the report, which was obtained by The Epoch Times. At one point, he drove the Nissan Pathfinder he was in through a red light, enabling officers to stop him.

Morrison told officers that he was instructed to follow a vehicle from his superiors in New York, including booking producer Irene Byon.

“New York told you to follow a vehicle?” an officer asked.

“Yes,” Morrison said, adding that he wasn’t sure how the higher-ups knew about the bus.

“It was discreet. I wasn’t going to talk to anybody or anything. Just trying to find a location,” Morrison said.

Byon was called, and she also made a statement indicating that NBC’s goal was to learn where the jurors lived.

“We were just trying to respectfully, trying to see if it’s possible to find any leads about the case and so we were just keeping our distance just to see where people involved in the trial are positioned,” Byon told an officer, the body camera footage shows.

The officer had not mentioned the jury to Byon, nor had Morrison.

“By no means were we trying to get into contact with any of the jury members or whoever’s in the car. We were just trying to see where key players in the trial may be at,” she said.

Multiple NBC workers were “positioned in different areas” around the courthouse and “we had people following” different individuals, Byon said.

MSNBC was banned from the Kenosha County Courthouse, where Rittenhouse’s trial was taking place, because of what happened, Circuit Judge Bruce Schroeder said.

“This is a very serious matter, and I don’t know what the ultimate truth of it is, but absolutely it would go without much thinking that someone who is following a jury bus, that’s an extremely serious matter and will be referred to the proper authorities for further action,” Schroeder said at the time.

An NBC spokesperson a day later didn’t deny that Morrison was following the bus and didn’t rule out contacting jurors after the trial ended.

“While the traffic violation took place near the jury van, the freelancer never contacted or intended to contact the jurors during deliberations, and never photographed or intended to photograph them. We regret the incident and will fully cooperate with the authorities on any investigation,” the spokesperson told The Epoch Times in an email.

The spokesperson on Dec. 1 didn’t respond to a list of 10 questions, including whether NBC was attempting to learn where jurors lived. Byon deleted her LinkedIn and Twitter accounts after being messaged by The Epoch Times. Morrison couldn’t be reached.

Morrison was booked and released on the offense of running a red light. He is not facing charges relating to following the bus.

“Our officers became aware of the suspicious vehicle after observing it blatantly run a red light to keep up with the jury transport. A traffic stop was conducted and the operator identified himself as an NBC producer. Ultimately, there was no arrest for jury tampering because police interrupted any opportunity to do so,” Lt. Joseph Nosalik, a Kenosha police spokesperson, said in a statement.

Rittenhouse was acquitted on all charges by the jury. None of the jurors’ identities are public at this time.