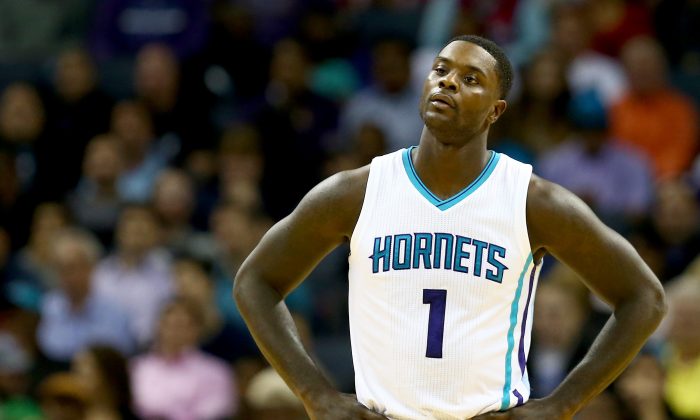 Lance Stephenson #1 of the Charlotte Hornets reacts to a call against the Los Angeles Clippers during their game at Time Warner Cable Arena on November 24, 2014 in Charlotte, North Carolina. (Photo by Streeter Lecka/Getty Images)
NBA

The NBA trade rumors are picking up, with Lance Stephenson the latest player rumored to be on the block.

Stephenson Could be Dealt

Stephenson has been struggling mightily since arriving in Charlotte as a free agent, and the team might be the most disappointing in the league so far in terms of living up to expectations in place before the season.

Sources across the league told Grantland that the Hornets “have been aggressive making trade calls.”

“The Hornets are searching for upgrades on the wing and at power forward, per those sources, and they are willing to talk turkey on basically anyone other than Kemba Walker and Al Jefferson. Free agents signed this past offseason can’t be traded until December 15, and few would be surprised if the Hornets make and take calls on Lance Stephenson ahead of that trigger date,” the website said.

“Now the Hornets are in trouble, and they’ll scour the trade market while hoping the status quo roster can find just enough punch to trample over a few of the teams that will surely stumble down the Eastern Conference ladder.

“You could see them making calls on a number of potentially available wings: Randy Foye or Wilson Chandler in the Denver overflow pile; Jeff Green in Boston, capable of swinging between both forward positions; Corey Brewer, suddenly weirdly essential for a banged-up Minnesota team; and in a much lower trade-value range, shooting tweeners like Dorell Wright and old friend Anthony Tolliver.”

It’s no secret the Cleveland Cavaliers are seeking a defensive wing player and a rim-protecting big man, and a number of prospects have been named already including Andrei Kirilenko and Corey Brewer.

The Beacon Journal has put forth some other names, in what it says “is simply a realistic perspective of players around the league who fit within the trade exception and fill one of the Cavs’ two areas of need.”

Among them are Bismack Biyombo, a lengthy big man who is riding the Hornets bench this season; and Joel Anthony, a veteran center who can rebound and defend but is also not getting much playing time in Detroit.

As far as other wing players go, DeMarre Carroll on the Atlanta Hawks is a possibility, as is offensive sparkplug Ben Gordon of the Orlando Magic or 3-point specialist Gary Neal.

Other potential targets include Kosta Koufos of the Memphis Grizzlies, Zaza Pachulia of the Milwaukee Bucks, and Luis Scola of the Indiana Pacers.

Speaking of Kirilenko, the forward currently on the Brooklyn Nets, he left the team recently to tend to an undisclosed family matter, fueling the trade rumors.

Yahoo said that besides the Cavaliers, the Los Angeles Clippers are also interested in the 33-year-old defensive player.

“The Nets have been working to find a team that’ll take the balance of his $3.3 million deal for the 2014-15 season, but a family matter that may require him remaining in New York until January or February could make it difficult for the Nets to trade him soon, sources said,” the website reported.

“Andrei has all the power now,” one rival executive said. “He can say he likes the situation enough to play or not to play.”

Williams Being Put on Display

Another potential player to be traded is Derrick Williams of the Sacramento Kings.

Williams has earned some attention after getting some more playing time over the past couple weeks, scoring 7.6 points and grabbing 2.8 rebounds a game.

But Cowbell Kingdom says that the forward is actually being put “on display,” and will likely be traded.

“It’s no secret that Williams’ time is coming to an end in Sacramento. He is regarded around the league as a reclamation project at best, and at worst, a bust. The Kings can sell him to other clubs as an expiring deal, or let him walk when free agency begins,” it said.

“The Kings want to squeeze the most out of their asset while they can. Middling and bottom-tier clubs would love to trade for Williams’ contract to shed long-term salaries, but what Sacramento is currently doing is reminding NBA scouts and general managers that the 6-foot-8, 240-pounder retains his tantalizing potential. He is a hyper-athletic combo forward who’s still developing a go-to move. His assertiveness is another issue, but in the right situation, his career may be salvageable.”

The Kings have other trade chips, including rookie Nik Stauskas and several friendly contracts, and could pull off a big trade. It’s unclear who is among their top targets, though.