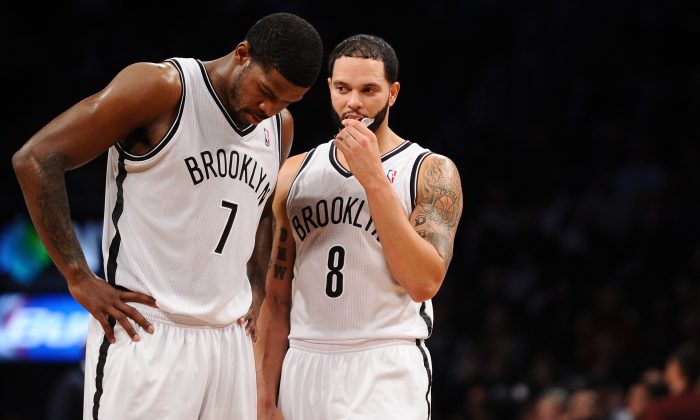 Joe Johnson #7 and Deron Williams #8 of the Brooklyn Nets talk during the second half against the Washington Wizards at Barclays Center on December 18, 2013 in the Brooklyn borough of New York City. (Photo by Maddie Meyer/Getty Images)
NBA

The NBA trade rumors are heating up as more and more players become subject of speculation and reports.

The Brooklyn Nets have started letting teams know that Deron Williams, Joe Johnson, and Brook Lopez are available via trade.

The Nets are struggling at 8-11, and all three veterans are having relatively poor seasons.

The team has “let it be known that they are prepared to move any of those franchise cornerstones in what would likely be separate deals if they came to fruition because of the high salaries each possess,” reported ESPN.

But, it emphasized, sources said no trade is imminent at the moment.

“Sources insist that the Nets haven’t abandoned their recent ‘win-now mentality’ and aren’t merely looking to dump salary. Brooklyn’s hope, sources said, is eventually to construct a deal or two that bring back sufficient talent that enables the Nets remain a playoff team,” it added.

Williams, 30, has two years remaining on a five-year, $98 million deal. He’s due $21 million next season and $22.3 million in the final season of his contract, although he has a player option, so he could be a free agent in the summer of 2016.

Lopez, 26, has one year left on his contract. He’s expected to exercise the player option for next season worth $16.7 because of lingering injuries.

Johnson, 33, also has one year left on his contract, and is set to make $24.9 million next season.

The trio is the highest-paid trio in the league this season at $58.7 million combined.

The Cleveland Cavaliers have added another target to their ever-expanding wishlist–Kosta Koufos.

The backup center on the Memphis Grizzlies is frustrated with his lack of playing time behind Marc Gasol and Zach Randolph , and will be an unrestricted free agent this summer.

The Cavs are trying to get the Grizzlies to take Dion Waiters in return for Koufos, sources told ESPN.

“If the Grizzlies could add a scorer like Waiters for a player who could simply leave them without compensation in July, either to keep or trade themselves, you figure they’d have to consider it,” it said.

“Especially since the Grizzlies, as formidable as they’ve looked so far, could certainly use another wing scorer to boost their own long-term aspirations, though it’s a secret to pretty much no one at this point that Waiters — judging by his struggles to adapt to a reserve role under first-year Cavs coach David Blatt — doesn’t want to come off anyone’s bench.”

The Cavs have also been linked lately to the Grizzlies’ backup small forward Tayshaun Prince.