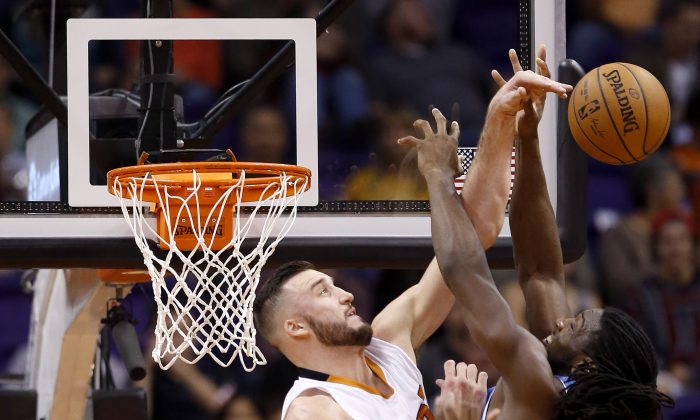 Phoenix Suns' Miles Plumlee, left, blocks the shot of Denver Nuggets' Kenneth Faried, right, during the second half of an NBA basketball game, Wednesday, Nov. 26, 2014, in Phoenix. The Suns' Plumlee was called for a foul on the play, but the Suns defeated the Nuggets 120-112. (AP Photo/Ross D. Franklin)
NBA

The NBA trade rumors are heating up with just weeks to go until the deadline hits.

The Phoenix Suns are trying to deal Miles Plumlee, who has slipped behind Alex Len and Brandan Wright in the team’s center rotation.

Plumlee’s agent Mark Bartelstein and the team are working together to try to find a landing spot for the third-year player, sources told ESPN.

The Suns are seeking at least one future-first round pick for the 26-year-old, who was selected 26th overall in the 2012 draft by the Indiana Pacers.

Suns blog Valley of the Suns believes the team won’t trade Plumlee unless it can get that first-round pick, or unless he’s part of a bigger deal. “There’s no rush just yet,” it said.

Veteran Tayshaun Prince was acquired recently by the Boston Celtics, and might not be there for long amid the youth movement in the team.

But as a buyout or trade hasn’t been worked out yet, Prince reported to practice on Sunday for the first time.

“All options are on the table right now, whether it’s me being here for the rest of the year or it’s a buyout or whatever the case may be,” Prince told the Boston Herald.

“But the most important thing is, even though all options are on the table, my job is to be a Boston Celtic at this point in time and help where help is needed. So that’s the main thing, and I can’t have one foot in and one foot out the door right now — even though everything’s on the table. That would be wrong on my behalf. So we’ll see how it plays out.”

One team that may be interested–the Los Angeles Clippers, according to Ken Berger of CBS.

He was averaging 7.3 points on 41 percent shooting in Memphis this season, with 9 starts out of 26 games. He started all 76 games he played last season.

A number of teams have been inquiring about Brook Lopez, who many believe will be dealt before the deadline. He’s coming off the bench now under Nets coach Lionel Hollins, and the team wants to free up some cap space.

Adrian Wojnarowski of Yahoo reported a number of teams’ interest in Lopez, who is averaging 15 points on 50 percent shooting this season, along with 6.2 rebounds and 1.5 blocks.

The Oklahoma City Thunder, Houston Rockets, and Los Angeles Lakers are among the potential landing spots for the former All-Star.

ESPN reported that the Thunder nearly completed a three-way trade that would have also involved the Charlotte Hornets, but the Nets ultimately decided that they didn’t want to take a chance on Lance Stephenson.

However, Marc Stein of the network said he’s certain Lopez, 26, will be moved by the deadline, especially given how far the Nets went in the discussions.

Another possible partner is the Miami Heat, with Ira Winderman of the Sun-Sentinel suggesting that Chris Andersen, Mario Chalmers, and Danny Granger could be swapped for Lopez. The Heat could also pair Luol Deng with just about any other player on the roster and deal for Lopez. He did note, though, that neither side seems to get what they want in those potential deals.

The Nets are still looking hard for deals for Lopez, and Deron Williams or Joe Johnson.

A source told Yahoo that the Lopez talks just haven’t worked out well. “Standing pat at this time,” the source said. “There was nothing we liked.” The Nets don’t want to just dump salary–they also want some talent in return.

While the Thunder nearly acquired Lopez, the local paper says that the team should instead try to snag Stephenson.

“Trading for a center with bad feet and a bad contract — Lopez is due $16.7 million next season, and he’s missed 161 games the last 3 1/2 seasons — doesn’t seem like a Sam Presti deal. Sounds like a trade the Knickerbockers would make,” wrote Barry Tramel of The Oklahoman.

“If Presti wants to invigorate the Thunder roster, and limit it to the names being tossed around in the Thunder-Brooklyn-Charlotte scenario, Lopez is not the guy. Lance Stephenson is.”

“What the Thunder needs is help outside, particularly defense,” he added.

“Dion Waiters seems to try, but that’s not enough. Reggie Jackson gets torched by the minute. Anthony Morrow isn’t physically capable. Russell Westbrook and Roberson are the only perimeter defenders capable of lockdown defense. Westbrook does so much all over the court, his focus can wane; Roberson has become an offensive albatross.”

Stephenson, 24, signed a three-year deal with the Hornets with a team option for the final year. He’s averaging 10.2 points on 45 percent shooting, as well as 4.7 rebounds and 3.3 assists, per game.