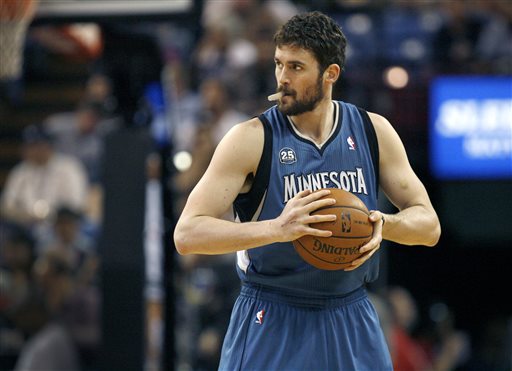 Eric Bledsoe, Rajon Rondo, Josh Smith are among the other top names.

Check out the latest buzz down below:

The rumors about a possible Love trade to the Cleveland Cavaliers keep getting more intense, with ESPN now reporting that the Cavs are willing to part with both this year’s No. 1 pick Andrew Wiggins as well as last year’s No. 1 pick Anthony Bennett.

One source said that the Cavs would also give up next year’s first-round pick if need be.

“At one point, a trade seemed close to happening, but Minnesota wants more than the Cavaliers are currently offering, sources said,” it reported.

However, some basketball observers aren’t fans of ESPN and their reporting on rumors. In line with those thoughts, Chris Haynes of Comcast SportsNet Northwest says that Wiggins “has not been made available to Wolves or anyone,” citing multiple league sources.

Two people familiar with the situation confirmed with the Associated Press that the Cavs position on not trading Wiggins has remained unchanged.

Wiggins addressed the rumors for the first time on Friday night, saying: “I let my agent and my support system really handle that,” he said. “I love playing the game of basketball, I know the NBA is a business. … If it’s someone important [asking me about the rumors], like your family or friends, you tell them what you know. If it’s not, it goes through one ear and out the other. … I just know what you know. I just see what you see on TV. That’s about it.”

Another big rumor floating around is about the Los Angeles Lakers and Bledsoe, a restricted free agent.

“My source in L.A. is pushing Lakers to offer Julius Randle, Jordan Hill, and the first-round pick acquired in the Jeremy Lin trade in sign & trade for Bledsoe,” said Jon Bloom of AZSports.

He later added an update: The Suns are maintaining desire to keep Bledose while Lakers haven’t confirmed interest in sign-and-trade.

The blog Bright Side of the Sun noted that Bloom doesn’t often post rumors but that there’s no indication that the person pushing for the deal is a decision maker.

A league source told the blog that there’s nothing happening between the teams as of now, and that the Suns do want to keep Bledsoe and are working on a new contract now.

There’s been lots of rumors surrounding Rondo, who has one-year left on his contract, including the latest that link him to the Houston Rockets.

But multiple sources told the Boston Herald that there has been no communication as reported between the Rockets and Celtics.

“The first clue that there may be no substance here might be that Houston had nothing it possibly would be willing to give up for Rondo that would appeal to the Celts,” it reported.

“According to league sources, Danny Ainge has been pretty firm in the past on his need to get a major player in return for his All-Star point guard, and while the president of basketball operations has to realize Rondo’s impending 2015 free agency may change the game a bit, he is still under no time pressure to pull the trigger.”

And in contrast with Love, Rondo has said that he would like to remain with the Celtics. And the team wants to find another good player to pair with Rondo. Wyc Grousebeck, the Celtics owner, said recently:

“We had definitely hoped to try to make bigger moves this offseason, to be honest,” he said. “Having said that, it takes two partners to make a trade, so we focused on longterm trying to build the club. We think we’re a better team now — positioned for the future, some new young talent and even more draft picks — but it’s been a patient summer so far, and I’m not always the most patient guy.”