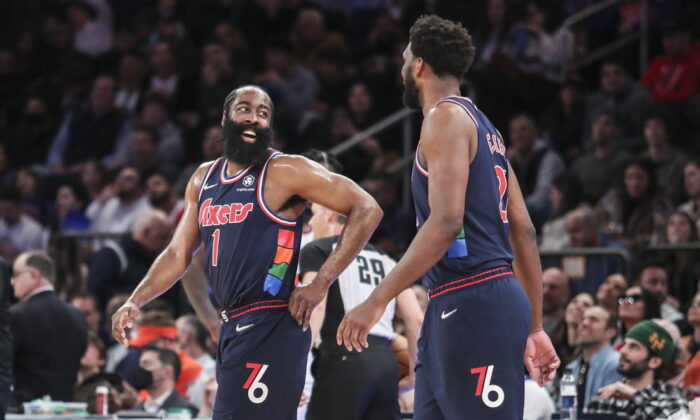 James Harden posted a triple-double in his second game with Philadelphia on Sunday afternoon, recording 29 points, 16 assists and 10 rebounds as the visiting 76ers pulled away late in the fourth quarter to beat the New York Knicks 125–109.

Harden, acquired from the Brooklyn Nets on Feb. 10, added five steals as he became the first player in 76ers history to finish with at least 25 points, 15 assists, five rebounds and five steals in a game.

Joel Embiid scored 37 points while going 23-of-27 from the free-throw line—the makes and attempts were career-highs—for the 76ers, who have won three in a row and five of six. Tyrese Maxey scored 21 points and Tobias Harris 12.

For the Knicks, who have lost nine of their past 10 games, RJ Barrett and Evan Fournier each had 24 points while Julius Randle (16 points, 10 rebounds) had a double-double. Immanuel Quickley added 21 points off the bench.

Saddiq Bey’s 28 points and Jerami Grant’s 26 points led the Pistons, while Olynyk ended up with 20 points and eight rebounds. Cade Cunningham added 19 points and Hamidou Diallo had 13 points for Detroit.

Donovan Mitchell scored 26 points to lead Utah to a win in Phoenix.

Rudy Gobert tallied 16 points, 14 rebounds and three blocks for the Jazz. Jordan Clarkson chipped in 22 points off the bench. Utah made 17 3-pointers. Mitchell led the way, making 6 of 11 from the perimeter. The Jazz also outscored the Suns 43–11 in bench points.

Dorian Finney-Smith tipped in his own miss to give Dallas the lead for good with 5:05 to play, erasing a 19-point, fourth-quarter deficit en route to a shocking victory over Golden State in San Francisco.

Luka Doncic went for a game-high 34 points as part of a double-double with a game-high 11 rebounds for the Mavericks, who successfully rebounded from a loss at Utah on Friday night.

Stephen Curry finished with a team-high 27 points for the Warriors.

Oshae Brissett scored a season-high 27 points to lead four Indiana scorers with at least 20 points as the host Pacers handed the visiting Boston Celtics just their second loss in the last 13 games. Indiana and Boston came into Sunday’s matchup on opposite trajectories, with the Celtics having lost just one game since Jan. 29 and the Pacers on a skid dropping eight of the previous nine.

But behind its balanced scoring effort and dominant second and fourth quarters, Indiana cruised to its most lopsided win since beating Chicago by 32 points on Nov. 22. Tyrese Haliburton, Buddy Hield and Malcolm Brogdon all made multiple 3-pointers en route to 22, 21 and 20 points, respectively. Haliburton shot 4-of-6 from beyond the arc, including a deep shot before the shot clock expired that gave the Pacers a 66–55 lead going into halftime.

For Boston, Jaylen Brown scored 23 points on 10-of-16 shooting from the floor and dished eight assists. Robert Williams III posted a double-double with 10 points and 11 rebounds.

Reggie Jackson scored a game-high 26 points and Ivica Zubac recorded a double-double as Los Angeles eked out a one-point road victory over Houston.

Jackson buried a pullup jumper with 1:25 remaining that gave the Clippers the lead for good. Zubac, who paired 14 points with 15 rebounds, followed by thwarting a driving dunk attempt from Christian Wood with 16.1 seconds remaining. Zubac added six blocks to his ledger. Jackson added nine rebounds and six assists while Marcus Morris Sr. chipped in 13 points as the Clippers won for the fifth time in six games and moved above .500 for the first time since New Year’s Day.

JaMychal Green came off the bench to record 20 points on 7-of-8 shooting and collected 10 rebounds to help red-hot Denver cruise to a win over host Portland.

Anfernee Simons led the Trail Blazers with 16 points but was just 5 of 18 from the field.

CJ McCollum scored 22 points to lead six New Orleans scorers in double figures during a rout over the host Lakers.

Jonas Valanciunas added 19 points and 10 rebounds, Brandon Ingram scored 19 points and Devonte’ Graham had 12 off the bench. The Pelicans swept a two-game road trip that began with a 117–102 victory at Phoenix on Friday.

LeBron James scored 32 points, Russell Westbrook had 16 and Carmelo Anthony added 13 for the Lakers, who lost their second straight game after the All-Star break and fell for the sixth time in eight games.