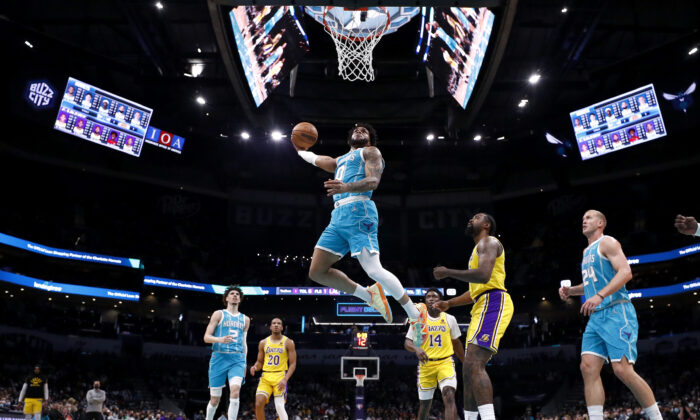 Miles Bridges #0 of the Charlotte Hornets dunks the ball during the first half of the game against the Los Angeles Lakers at Spectrum Center, in Charlotte, on Jan. 28, 2022. (Jared C. Tilton/Getty Images)
NBA

The Charlotte Hornets (28–22) nearly lost on the last shot after leading the short-handed Los Angeles Lakers (24–26) the entire game on the way to a 117–114 victory on Friday night.

The Hornets survived Russell Westbrook’s 26-foot three-point attempt with 0.7 seconds left in the game that hit the back left side of the rim; Westbrook went for the win instead of going for a two pointer that would have tied the game.

Russell Westbrook was forced to lead the Lakers without LeBron James and Anthony Davis; James missed his second game with left knee soreness, and Davis was out with right wrist soreness after recently returning after a long absence from MCL knee injury. Malik Monk also missed with a sore left groin.

Charlotte was missing veteran leadership in Gordon Hayward, and scoring of Kelly Oubre, who had a sprained left ankle.

So Miles Bridges led the Hornets with 26 points on 9 of 15 shooting, eight rebounds, six assists, and two steals; he had a spectacular windmill dunk driving in the lane.

“I’m comfortable right now and I love to have the ball in my hands,” said Bridges. “LaMelo does a great job of getting everyone the ball.”

Ish Smith, averaging 4.8 points, came off the bench for 22 points on 10–12 shooting, two rebounds, and five assists. Starters LaMelo Ball and Terry Rozier added 20 points each for the Hornets.

The Hornets took the early lead of 9–0 on the way to their biggest first-quarter lead of 16–3 and led by 20 in the third quarter before the Lakers cut the deficit to two late in the game.

The Lakers started one for fifteen from the field and ended the first quarter down by 10, 31–21.

Westbrook scored just five points in the first half, but got red hot scoring 14 in the third quarter on the way to 35 total points in the comeback attempt; he was 12–23 shooting, 8 of 10 free throws, four rebounds, and five assists.

The Lakers got the bulk of their scoring off the bench; Carmelo Anthony had 19 points, rookie Austin Reaves scored 16, and Kent Bazemore added 13 points.

Westbrook had extra motivation from some trash-talking by Bridges; who received a technical foul calling Westbrook “too small.” Bridges explained after the game that he was just having “fun,” but actually complimented Westbrook for making it such a difficult finish.

“He does get all the hate in the world, but you got to praise the man,” said Bridges. “He was a MVP in this league, made the finals. He’s a great player.”

Since coming to the Lakers this season, Westbrook has been often criticized for not producing; the chemistry with James and Davis is still missing as they are two games below .500; and have now lost seven of their last 10 games.

The Lakers were down 65–49 at halftime; and trailed by 20 points in the third with 9:18 left following Bridges lay-up.

Westbrook and Anthony would lead a comeback to get the Lakers within one point, 86–85, following Reaves free-throw with 1:01 in the quarter.

The Hornets would regain momentum to lead by 101–91, before another comeback in the final minutes getting within one, 115–114, with Stanley Johnson’s driving layup with 24.9 seconds to play. Hornets owner, Michael Jordan, would leave his box view not being able to bear the comeback he was witnessing.

Ball would add a free throw before Westbrook’s game-winning attempt. Another free throw by Charlotte ended the game 117–114.

Regarding Westbrook’s decision to attempt the three-pointer versus a higher percentage two-pointer, Westbrook said, “I had just made two (three-pointers) just before that, so I will live and die with that one.”

Westbrook is the first Laker to score 30 in a half since Kobe Bryant’s last game; Bryant scored 38 in the second half to finish with 60 and the victory. It’s Westbrook’s most points and a half in the last four seasons; also the first time in his that he’s ever had 30 points and no turnovers and a half.

The Hornets host the Los Angeles Clippers on Sunday; while the Lakers continue their road trip to Atlanta on Sunday.