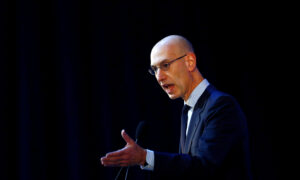 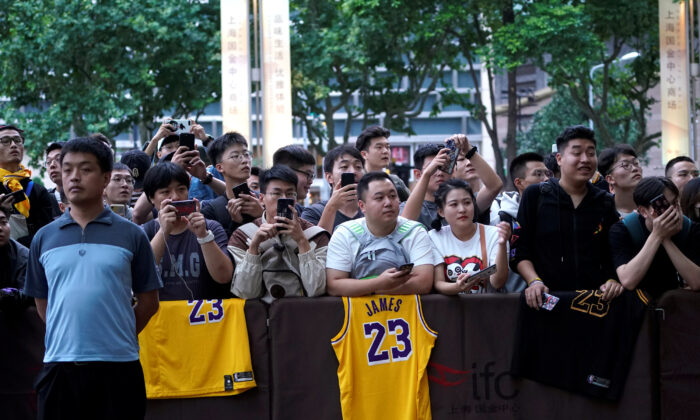 SHANGHAI/BEIJING–Thousands of Chinese fans cheered and clapped through an NBA exhibition game in Shanghai on Oct. 10 after days of controversy over a huge backlash against a tweet backing pro-democracy protests in Hong Kong.

The crowd waved Chinese flags in the arena before the game started, but the packed stands gave the players a huge welcome on court and shouted enthusiastically throughout the game.

Roads near the stadium were blocked off and those attending the exhibition game had to go through two rounds of security checks. Tickets sold for as high as 18,888 yuan ($2,650).

Several street vendors were selling Chinese national flags outside the arena and some people had called online on those going to the game to carry flags in a show of force.

Some people protested outside the stadium against Morey and NBA Commissioner Adam Silver, who has spoken out in support of Morey.

NBA events scheduled on Tuesday and Wednesday were canceled and Chinese sponsors and partners have suspended or severed ties with the league.

State broadcaster CCTV and Tencent will not show Thursday’s game or the rematch scheduled for Saturday in Shenzhen on their platforms, underscoring the severity of the fallout.

The NBA said in an email on Thursday that players and personnel would not be made available to the media. The league had scheduled a briefing before and after the game, and Silver had been expected to address the media.

The Hong Kong protests began in opposition to a bill allowing extradition to mainland China but have since evolved into broader calls for democracy. China has accused the West of stirring up unrest in Hong Kong, and Chinese state media has characterized Morey’s tweet as the latest example of meddling in China‘s own affairs.

Silver spoke out in support of Morey’s freedom of expression on Tuesday, further angering Beijing. The NBA’s business in China, which took years to cultivate and is estimated to be worth more than $4 billion, is under immense pressure.

The NBA did not immediately respond to a request for comment on whether Saturday’s Lakers-Nets game would take place.

Houston Rockets sneakers and other merchandise were pulled from several Nike and NBA stores in major Chinese cities, with the franchise’s direct association with Morey making it a central target of the furor. Managers at some of the Nike stores said they had been instructed to remove the goods via an internal memo from management.

A specialist NBA store at a major shopping center in Shanghai removed all Rockets merchandise, as did the basketball-themed NBA Playzone family entertainment centers in Beijing and Shanghai.

“Rockets products were hot before and when you stepped into the store, it was full of red. Now, it is mostly yellow and blue,” the colors of the Golden State Warriors, said a manager at the Shanghai Playzone, who declined to be identified because of the sensitivity of the issue.

Nike and the NBA did not immediately respond to Reuters’ request for comment.