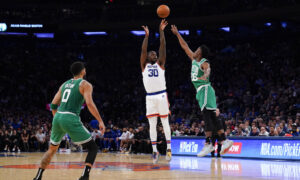 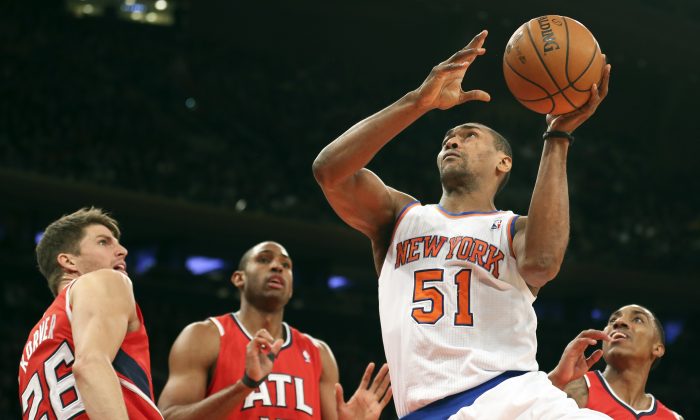 The NBA free agent rumors have died down but there are still a number of players out there that teams want.

Check out the latest buzz down below:

The New York Knicks may pick Peace back up on a mostly non-guaranteed deal.

The Knicks are discussing whether to extend a training-camp invitation to Peace, reported the New York Post. “[World Peace] has the utmost respect for Phil and Derek,” his agent, Marc Cornstein, said. “There’s a history there. They know he’s out there.”

Peace was bought out by the Knicks, which are paying him $250,000 for next season. If he made the team, he’d be eligible for the $1.4 million veteran’s minimum. Sources told the Post that Peace wouldn’t have asked for his release if he had known Jackson was coming.

If the reunion doesn’t work out, Peace may become the assistant coach for the Palisades High School girls basketball team in Los Angeles.

Miami Heat shooting guard Ray Allen (34) reacts to shot that took the game into overtime during the second half of Game 6 of the NBA Finals basketball game against the San Antonio Spurs, Wednesday, June 19, 2013 in Miami. The Heat won 103-100 in overtime. (AP Photo/Lynne Sladky)

Many are wondering what Allen is going to do–retire, or sign with another team?

Allen has spent the last few years on the Miami Heat but isn’t expected to return after LeBron James departed to Cleveland.

The Cavaliers are among the teams that Allen is considering if he doesn’t retire. Marc Spears of Yahoo said that Allen is in China until July 27 and till doesn’t appear to be in a rush to decide playing future, according to sources.

The Bulls are close to a deal with veteran scorer Aaron Brooks.

Brooks, 29, has averaged 11.1 points and 3.4 assists over his six-year career and is set to sign with the Bulls for a veteran’s minimum, a source told the Chicago Tribune.

Marc Stein of ESPN confirmed the interest in Brooks and also said Chicago wants to bring back John Lucas III for another scoring punch off the bench.

The team said Saturday that it has re-signed Glen Davis, who averaged 4.2 points and 3.0 rebounds in 23 games last season, when he joined the Clippers at the end of February.

The 28-year-old free-agent forward has also played for Orlando and Boston, where he and current Clippers coach Doc Rivers won the NBA championship in 2008.