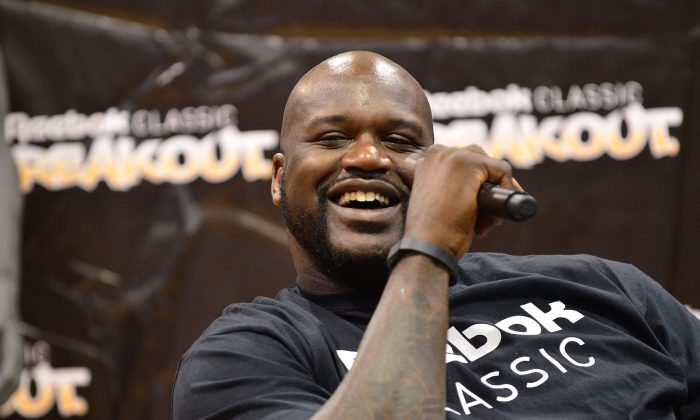 Shaquille O’Neal breaks out in a rap and hopes that Pharrell Williams includes him on the NBA 2K15 soundtrack.

NBA 2K15 is launching on October 7 on the PlayStation 4, PlayStation 3, Xbox One, Xbox 360, and PC, and Williams is in charge of the game’s soundtrack.

2K15 will have the largest soundtrack of all the NBA 2K games to date.

When asked by Billboard about his reaction to being selected to curate the 2K15 soundtrack, the singer and producer of “Happy” said, “I couldn’t believe my name got tossed in the hat!”

LeBron James and Jay Z curated the soundtrack for 2K13 and 2K14.

Williams is taking a novel approach to picking songs for the soundtrack.

“I had some people from my staff — they were all girls and women — and we just talked about it,” said Williams.

“They know so much more about the sport than I do.”

Williams added that his approach to the soundtrack was based on the game’s female audience and the need to break away from his predecessors.

“There are girls that play the game and there’s a lot of girls that are around it … so I thought it’d be such an interesting twist to have the girls weigh in on the song list, because they listen to it just as much,” Williams explained.

“I tried to pick an alternative approach, because how do you follow up LeBron and Jay? I gotta take a different route.

“When we finished looking at the list, it felt right.”

The songs in the soundtrack will be released later in the summer.