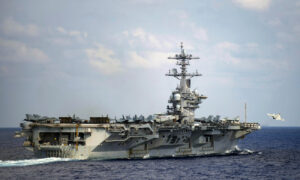 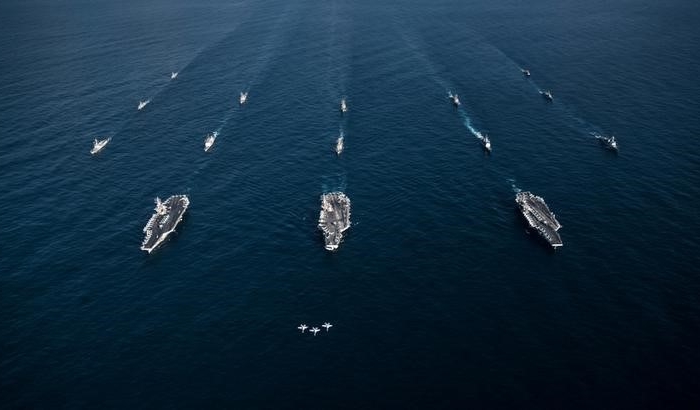 Three F/A-18E Super Hornets fly in formation over the aircraft carriers USS Ronald Reagan (CVN 76), USS Theodore Roosevelt (CVN 71), USS Nimitz (CVN 68), and their strike groups along with ships from the Republic of Korea Navy as they transit the Western Pacific on Nov. 12, 2017. (Aaron B. Hicks/U.S. Navy/Handout via Reuters)
National Security

Navy to Build Prototype Drone Ship Over Next 3 Years

A prototype drone ship capable of waging electronic warfare at a speed of 24 knots will be built over the next three years, the U.S. Navy announced July 13, as part of emerging strategies to counter  China in the Indo-Pacific.

L3 Technologies has been awarded a $35 million contract for the development of a single Medium Unmanned Surface Vehicle (MUSV) prototype, with options to procure up to eight more, Naval Sea Systems Command said.

The MUSV is one of a number of potential unmanned concepts being explored by the Navy as it pivots strategy and equipment to respond to China’s arsenal of long-range missiles, built up while the United States was mired in post-9/11 counterinsurgency operations.

“The MUSV program will provide pier-launched, self-deploying, modular, open architecture surface vessels capable of autonomous navigation and mission execution,” the Navy said in the statement. “MUSVs will support the Navy’s ability to produce, deploy, and disburse intelligence, surveillance, and reconnaissance and electronic warfare capabilities, and provide/improve distributed situational awareness and sensing to the battle force.”

The Navy defines an MUSV as 45 to 190 feet in length, with a maximum displacement of about 500 tons, and capable of spending 60 days at sea with no human hand on board.

A larger unmanned sister ship at 200 to 300 feet long is also being developed, alongside unmanned submarines, the largest of which would be 51 feet long.

“Accelerating unmanned surface vehicle and payload development and warfighting integration will provide an inflection point in delivering a more distributed force in support of the National Defense Strategy,” the Navy said in the statement.

The concept of a “distributed force” means shifting from fewer larger ships to a more flexible fleet of smaller ships, which can be used flexibly and unpredictably, and with no single point of failure.

Unmanned options have various advantages, including being able to take greater risks (for example on reconnaissance missions), along with being potentially cheaper to run and manufacture.

Already postponed from last year, a sweeping Navy force-structure assessment has been bouncing around the corridors of the Pentagon for months, and now is expected to appear in the FY22 Pentagon budget request in the fall.

Before his resignation, acting Secretary of the Navy Thomas Modly indicated the review was looking at a fleet of potentially smaller boats, possibly with fewer carriers and more unmanned options.

China has spent the past two decades specifically bulking up its military capabilities such as long-range missiles and militarized islands to blunt the supremacy of the U.S. Navy, which concentrates its muscle in large ships.

The U.S. Marine Corps is also adjusting strategy in line with the concept of distributed operations.

Using higher numbers of smaller ships, the Marines would set up artillery, batteries, and surveillance on numerous remote atolls and island chains, without the provocation or risk associated with a carrier or large amphibious ship.