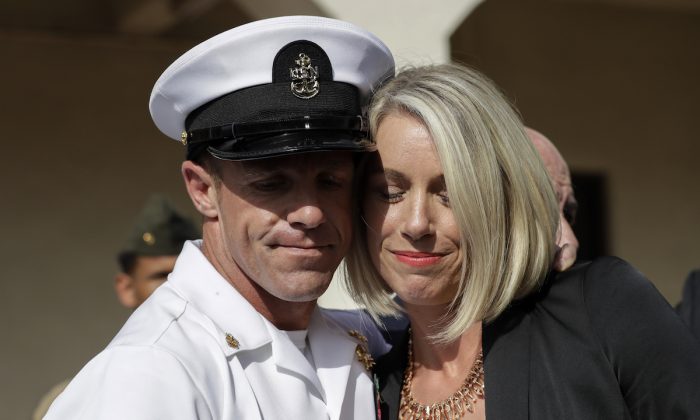 A Navy SEAL platoon commander acquitted of murdering a captured ISIS terrorist but convicted of unlawfully posing for photos with his dead body was sentenced on July 3 to a demotion in rank and pay.

The penalty imposed by a seven-member jury of U.S. Marines and Navy personnel spared the defendant, Special Operations Chief Edward Gallagher, from any prison time beyond the nearly seven months he had already served in pretrial custody.

The same jury found Gallagher not guilty on Tuesday of murder, attempted murder and other charges, including deliberately shooting at unarmed civilians and obstruction of justice. But he was found guilty of posing for unofficial pictures with a human casualty.

#BREAKING Navy SEAL Eddie Gallagher has been found not guilty of murder charges and guilty of wrongfully posing with a body. https://t.co/AkbETgOqe2

That offense, stemming from photos he and fellow SEAL members took with the corpse of the Iraqi prisoner whom Gallagher was acquitted of slaying, carries a maximum sentence of four months’ imprisonment.

Instead, he will receive a one-step demotion in his rank from chief petty officer to petty officer first class, presumably accompanied by a corresponding reduction in his pay. The sentence also carries a two-month forfeiture of his salary, a sum of nearly $5,400.

The outcome of the court-martial, capped by a three-week trial on various war crimes charges, marked a significant legal victory for Gallagher, 40, who would have faced a possible life sentence had he been found guilty of murder or attempted murder.

President Donald Trump, who intervened months ago to order Gallagher freed from pretrial detention, hailed the platoon leader on his acquittal in a Twitter post hours before sentencing.

“Congratulations to Navy Seal Eddie Gallagher, his wonderful wife Andrea, and his entire family. You have been through much together. Glad I could help!” Trump wrote.

Congratulations to Navy Seal Eddie Gallagher, his wonderful wife Andrea, and his entire family. You have been through much together. Glad I could help!

Gallagher, who was arrested last year, was moved in March from a military brig to less restrictive confinement at a Navy base at Trump’s direction in recognition of what the president called the platoon leader’s “past service to our country.”

Gallagher, a decorated career combat veteran, has been in the military 19 years and is a year away from retirement.

Before pronouncing sentence, the jury heard from two doctors specializing in brain injuries. They said Gallagher suffered repeated concussions during his combat career, putting him at high risk of brain degeneration and visual impairments that will require ongoing medical attention.

Gallagher, who did not testify in his own defense, said his accusers were disgruntled subordinates with no prior battlefield experience and had fabricated allegations against him over grievances with his leadership style and tactics.

Gallagher told the military jury considering his punishment that he has made “tactical, ethical, moral” mistakes but learned from them.

“I put a black eye on the two communities that I love—the U.S. Marine Corps and the U.S. Navy—specifically the SEAL community,” he said.

He said he tried to lead by example but didn’t always succeed.

“I’ve made mistakes throughout my 20-year career—tactical, ethical, moral—I’m not perfect but I’ve always bounced back from my mistakes. I’m ready to bounce back from this,” he said.

Gallagher told the jury he takes full responsibility for his actions on the day he took photos with the body of the 17-year-old prisoner.

Speaking of his accusers, Gallagher said, “this small group of SEALs that decided to concoct this story in no way, shape or form represent the community that I love.”

Gallagher also thanked Fox News “for being behind us from day one,” and also thanked Trump along with Republican Reps. Duncan Hunter of California and Ralph Norman of South Carolina.

His wife, Andrea Gallagher, has vowed to continue to take action over what she has described as prosecutorial misconduct and a shoddy investigation that led to her husband going to trial. She said she wants Naval Special Warfare Group 1 Commodore Capt. Matthew D. Rosenbloom to resign, among other things.

The jury of five Marines and two sailors, including a SEAL, is comprised mostly of seasoned combat veterans who served in Iraq. Several lost friends in war.

By Marty Graham. The Associated Press contributed to this report.