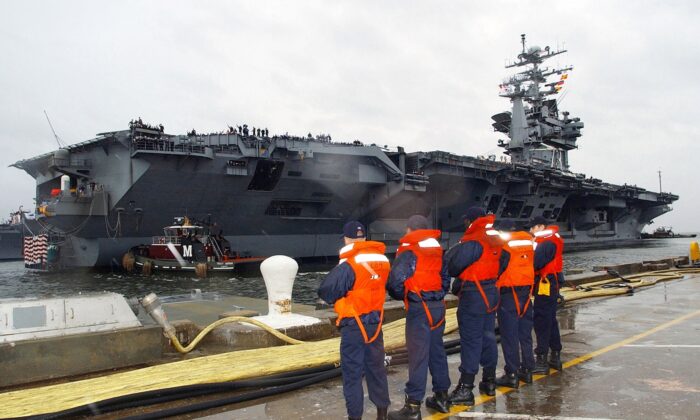 The U.S. Navy is investigating the sudden deaths of three sailors who were all assigned to the USS George Washington, a nuclear-powered aircraft carrier.

A Naval Air Force Atlantic spokesman confirmed in a statement to The Navy Times on Monday that a sailor “was found unresponsive” onboard the Nimitz class warship on April 15, while two other sailors were found dead at off base locations several days earlier.

Michael Maus, the U.S. Atlantic Fleet spokesman, said the service member who passed away on April 15 was treated by the medical team onboard the USS George Washington before being transported to Riverside Regional Medical Center in Newport News, where the sailor died.

Two other sailors were found dead about 24 hours apart, on April 9 and April 10.

Officials haven’t disclosed a cause of death for any of the three service members.

The Navy has identified the sailor found deceased on April 9 as Mikail Sharp, a retail services (RS) specialist. The sailor who was found dead on April 10 has been identified as Natasha Huffman, an interior communications electrician.

The third sailor, and most recent death, has not yet been identified.

Maus said the case is being investigated by the Naval Criminal Investigative Service in cooperation with local authorities.

“The Navy is cooperating with local authorities where both incidents have occurred, as both incidents remain under investigation,” he said. “Our thoughts and condolences are with the family, friends and shipmates of our Sailors.”

In response to the incident, a special psychiatric rapid intervention team (SPRINT) was brought on board the carrier. SPRINT is a team designated to provide mental health support following a traumatic event, such as a death.

The USS George Washington is currently in Newport News, where it is undergoing a refueling and complex overhaul. The carrier has been docked at the Virginian city since August 2017.