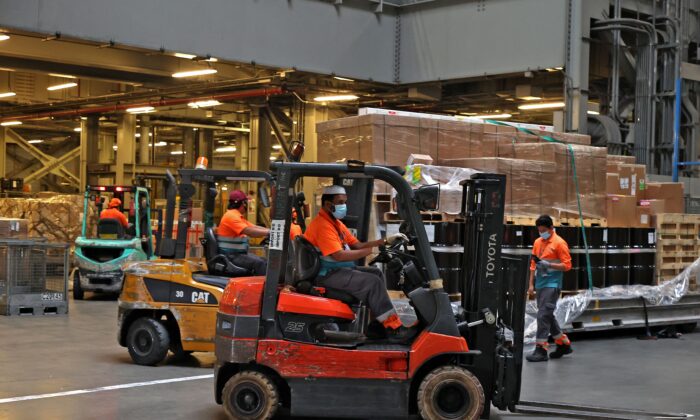 People who recovered from COVID-19 were well protected against severe COVID-19, even after the Omicron virus variant became dominant, according to a new study.

The people, benefiting from protection known as natural immunity, had approximately 88 percent protection against severe, critical, or fatal COVID-19 in cases caused by Omicron, according to researchers in Qatar.

That was down from 100 percent during the time of Delta dominance but about the same as the protection while the Beta variant was dominant.

“The protection of previous infection against hospitalization or death caused by reinfection appeared to be robust, regardless of variant,” the researchers, with Weill Cornell Medicine–Qatar and other institutions, wrote in the study, which was published by the New England Journal of Medicine.

The study drew from national databases containing information about COVID-19 cases, including testing and vaccination data.

The protection was the strongest against the Delta and Alpha strains, around 92 percent. It was the lowest, 56 percent, against Omicron.

Excluding people who recovered from COVID-19 and had received a COVID-19 vaccine, the protection rose to 62 percent against the variant, which emerged in Africa in late 2021 and has displaced Delta in countries around the world.

“Protection of natural immunity is robust against reinfection with Alpha, Beta, and Delta variants, at about 90%, but less so against Omicron at approximately 60%. Still, this shows that the natural immunity was relatively strong against reinfection with Omicron,” Dr. Laith Abu-Raddad, an infectious disease specialist at Weill Cornell Medicine–Qatar and one of the study authors, told The Epoch Times in an email.

Earlier studies have shown the protection against infection from both vaccines and natural immunity is lower against Omicron, a principal reason COVID-19 cases skyrocketed in the United States and elsewhere after the variant emerged.

The researchers were funded by the Qatar Ministry of Public Health, Weill Cornell Medicine, and several other institutions.

Dr. David Wohl, a professor at the University of North Carolina’s Division of Infectious Diseases who was not involved in the research, told The Epoch Times in an email that the study results were encouraging, “especially as Omicron spread has been so vast.”

Abu-Raddad contended that people who have natural immunity should still get a vaccine, pointing to the drop in protection against infection.

“Vaccination will enhance existing natural immunity. We have ongoing work, not yet published, showing exactly that. Hybrid immunity (natural and vaccine immunity) is most protective against COVID-19,” he said.

The view is common among experts but not universal; some say that the increase in protection from vaccination for the naturally immune is minimal and note that several studies have indicated that people with natural immunity who get vaccinated are more prone to suffer side effects.

“One could argue that if there is benefit it’s very modest,” Dr. Paul Alexander, a former U.S. Department of Health and Human Services COVID-19 adviser, told The Epoch Times in a previous interview.