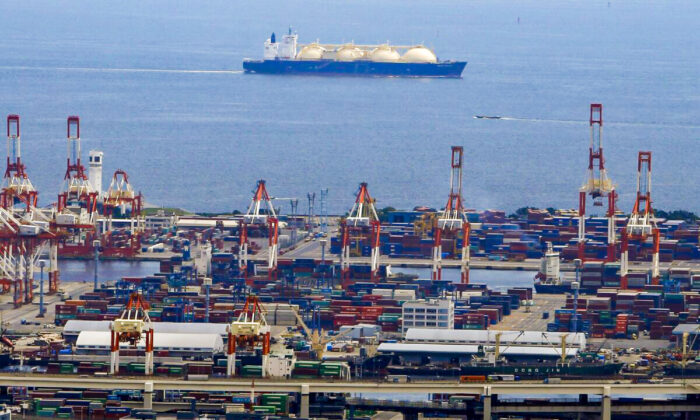 A liquefied natural gas tanker behind a port in Yokohama, south of Tokyo, on Sept. 4, 2015. (Yuya Shino/Reuters)
Commodities

U.S. natural gas prices in early morning trading on May 3 surged to their highest levels since September 2008, as faltering domestic gas production and the Russian invasion of Ukraine continue to disrupt global energy markets.

Natural gas prices have jumped more than 8 percent over the last two sessions, following a nearly 30 percent gain in April after the international sanctions on Moscow.

There is now growing concern that domestic stockpiles of natural gas will fall short of demand this summer.

The increase in export demand, lower U.S. production, warmer weather, and rising coal prices have contributed to the price spike, which is leading to inflationary pressures across the economy.

A recent heat wave that hit Texas has led the Energy Reliability Council of Texas to forecast record seasonal demand for power this weekend.

Weather patterns in the United States at this time of the year are normally calm enough for utilities, manufacturers, and brokers to easily accumulate ample volumes of gas in storage for use later in the year.

U.S. gas inventories are at 17 percent below normal, at the lowest spring volume since 2019, with stored gas being 21 percent lower than at this time last year.

The current shortfall is fueling the expectation of more price spikes later this year during the colder months.

Henry Hub prices had jumped more than 9 percent at one point during early trading to a session high of $8.169 per million British thermal units (MMBtu), the highest level in almost 14 years.

However, the gas contract fell back from its high, ending the day at $7.954 per MMBtu for a gain of 6.4 percent.

Energy analysts say that the increase is being sparked by news of possibly tighter market conditions, such as the European Union’s deliberation over a sixth round of sanctions against Russia, which could include a stricter ban on the country’s energy exports.

It is hoped that as maintenance in U.S. natural gas facilities wraps up in May, gas export volumes into Europe during the second quarter will accelerate, along with that of non-U.S. based gas suppliers from the Gulf of Mexico.