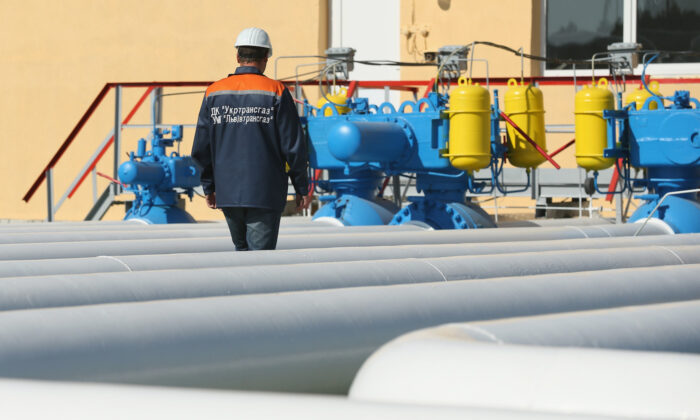 Natural gas prices in Europe jumped after Ukraine’s state-owned pipelined operator cut the flow of Russian gas at the Sokhranivka entry point on the border between the Luhansk region of Donbas on May 11.

Ukraine’s Gas TSO announced the previous day, that due to the lack of physical control of its pipeline in Russian-controlled areas of Eastern Ukraine, it was unable to carry out the fulfillment of its contracts, and would terminate deliveries to its clients in the West.

The Ukrainian gas exporter claimed that it repeatedly told Russian state-owned counterpart, Gazprom about potential threats to flows from interference after losing control of its facilities in the east of the country, but that their “appeals were ignored.”

It accused Russian occupying forces of interfering with their operations and that they were diverting gas in a way that endangered the stability of the pipeline system.

This was the first time that pipeline operations through Ukraine faced disruption since Russia invaded the country in late February.

The Ukrainian operator has also blocked gas transport through its border compressor station, Novopskov, which supplies about a third of the gas from Russia to Europe.

TTF European natural gas prices rose more than 6.4 percent by the morning of May 11, London time.

The Sokhranivka gas metering station and Novopskov, are both situated in Russian-controlled areas of the country, which up until now had been allowed to operate unimpeded.

GTSOU blamed “the actions of the occupiers” for the interruption of services and said in an official statement that “as a result of the Russian Federation’s military aggression against Ukraine, several GTS facilities are located in territory temporarily controlled by Russian troops and the occupation administration.”

“Currently, GTSOU cannot carry out operational and technological control over the CS ‘Novopskov’ and other assets located in these territories.”

“Moreover, the interference of the occupying forces in technical processes and changes in the modes of operation of GTS facilities, including unauthorized gas offtakes from the gas transit flows, endangered the stability and safety of the entire Ukrainian gas transportation system.”

The pipeline operator said it would still be able to fulfill its transit obligations to Europe by rerouting gas through its Sudzha interconnection point, which is located in Ukrainian-controlled territory.

Gazprom said that Ukraine’s request would be “technologically impossible” and it saw no grounds for the decision, but gas flows at Sudzha were able to rise overnight, by about 8 million cubic meters per day.

Germany, which needs gas for its major industries, is currently receiving 25 percent less gas through Ukraine, said the German Energy Ministry to the Associated Press on May 11.

A boost in gas supplies from Norway and the Netherlands is partly compensating for the shortfall, said Annika Einhorn, an energy ministry spokeswoman, who further commented that the majority of Russian gas reaches Germany through the Nordstream 1 pipeline through the Baltic Sea rather than via Ukraine.

However, the share of Russian gas that flowed to Europe through Ukraine had fallen to around 18 percent since the start of the war.

Russia recently halted natural gas to Poland and Bulgaria after the two countries balked at paying for gas in rubles.

Russia accounts for around 40 percent of all European Union natural gas imports.

The EU, which is heavily dependent on Russian energy supplies, is vulnerable to a recession if it faces a total cutoff of both oil and natural gas from Moscow, as it has no serious alternative at this time.

Although Brussels is in the process of banning Russian coal, with further plans to phase out imports of Russian oil, natural gas has not yet been directly targeted, since it is far more difficult to import from other sources.

Even if European nations used their total remaining import capacity to ship gas from non-Russian suppliers, it would only replace just under 29 percent of Russian gas imports.

A cut-off of gas itself would hit European industries such as metals, fertilizer, glass, and ceramics, which have begun to reduce production due to high gas prices.

Private consumers are expected to face even higher electric and heating bills, which will likely hit them harder this winter.

The threat of Russia potentially cutting off natural gas flows to Europe has prompted the EU to pursue alternative suppliers.

The EU leadership believes that they can reduce Russian gas imports by two-thirds by the end of 2022, through the importation of more gas from Norway and Azerbaijan, increased shipments of liquefied natural gas from the United States, further expansion of green energy, and enforced rationing of energy supplies.

The United States has agreed to expand liquefied-natural-gas exports to Europe through to 2030, but Washington has already stretched its existing delivery capacity to the limit.

Energy industry officials are saying that in order to achieve the target, the United States will require investments in new, multibillion-dollar export terminals.

The Associated Press has contributed to this report.