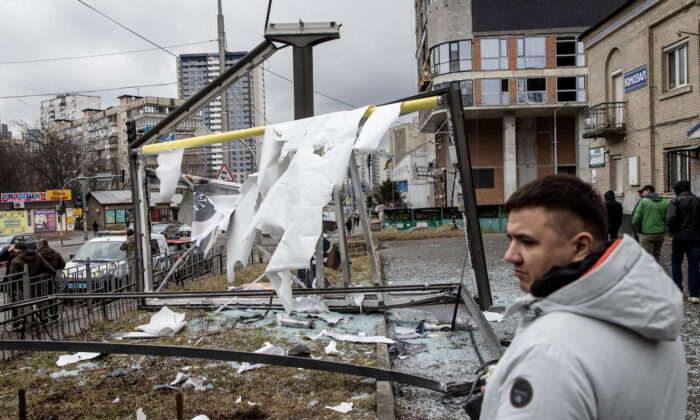 People stand around a damaged structure said to have been caused by a rocket in Kyiv, Ukraine, on Feb. 24, 2022. (Chris McGrath/Getty Images)
Gold and Commodities

Natural gas prices, already climbing over the past year, rose further in the wake of Russia’s invasion of Ukraine, a move that came after Germany halted certification of the Nord Stream 2 pipeline when Russia recognized the breakaway Luhansk People’s Republic and Donetsk People’s Republic.

Dutch natural gas futures surged by 51.87 percent, per Investing.com. In the United States, Henry Hub natural gas spot prices were up by a more modest 5.1 percent as of 10:50 a.m. Eastern time on Feb. 24, according to Business Insider.

A Feb. 24 joint statement from G7 leaders concludes with comments on the increasing prices of natural gas and oil, stating that attention to the commodities reflects their determination to “do what is necessary to preserve the integrity of the rules-based international order.”

“We are also closely monitoring global oil and gas market conditions, including in the context of Russia’s further military aggression against Ukraine,” the statement reads. “We support consistent and constructive engagement and coordination among major energy producers and consumers toward our collective interest in the stability of global energy supplies, and stand ready to act as needed to address potential disruptions.”

Marc Morano, proprietor of Climate Depot, told The Epoch Times that the G7 statement was “laughable,” given that up to 40 percent of European natural gas comes from Russia.

“The G7 is the reason that Europe is in this mess and beholden to [Russian President] Vladimir Putin,” Morano said. “Do you know how many G7 summits they’ve had, virtue signaling to the net-zero agenda for Europe’s version of the Green New Deal? Putin has them by the neck—he knows he has the power to tank their economy by shutting down his energy.”

On Feb. 22, recently elected German Chancellor Olaf Scholz moved to halt certification of the Nord Stream 2 gas pipeline, which would connect western Siberia with Germany via the Baltic Sea.

“It’s up to the international community to react to this one-sided, incomprehensible, and unjustified action by the Russian president,” Scholz said.

On Feb. 4, Russia and China signed a 30-year deal for a new gas pipeline linking the Russian Far East with northeastern China.

“The effects on Germany will be far worse than the effects on Russia. It’s kind of like cutting off your nose to spite your face,” he said.

Scholz, a member of the socialist Social Democratic Party of Germany, has formed a “traffic light coalition” with Germany’s Green Party. The Green Party’s candidate for chancellor, Annalena Baerbock, opposed the Nord Stream 2 pipeline during her campaign.

“As I have made clear, we will not hesitate to take further steps if Russia continues to escalate,” Biden said.

In the United States, the Energy Information Administration’s (EIA’s) Weekly Natural Gas Storage Report revealed that the lower 48 states had 1.78 trillion cubic feet in storage as of Feb. 18.

An EIA spokesperson told The Epoch Times that the agency doesn’t have any updated natural gas forecasts following the Ukraine invasion.

Geoffrey Lakings, an analyst with IIR Energy, told The Epoch Times via email that worldwide gas inventories have made for “incredibly tight global gas markets.”

“Europe is going to likely struggle to fill their caverns going into next winter,” Lakings said. “We know that their LNG [liquid natural gas] terminals are mostly heavily utilized at this time.”

Some media sources have closely linked energy price trends to events in Ukraine.

On Feb. 22, CBS News wrote on Twitter that “the U.S. economy has been hit with increased gas prices, inflation, and supply-chain issues due to the Ukraine crisis.”

“You may wonder, ‘what can I as an everyday citizen do to help?’ There is something. Putin’s war will raise, is raising, the cost of fuel and food. Be ready to explain that to friends and neighbors when Putin-friendly talkers and politicians try to blame our elected leaders,” David Frum wrote on Twitter.

Morano told The Epoch Times that the invasion is a scapegoat for spiking energy costs and inflation over the past few months. He drew attention to a new Heartland Institute study that found that Biden administration policies added $1,000 to the average household’s costs in 2021.

“Putin has taken a very bad situation and made it worse,” he said.

Russia’s actions are forcing a debate over the future of energy in Europe, where energy prices have been rapidly rising.

The UK’s Net Zero Watch, which describes itself on Twitter as a “campaign to highlight the serious economic and societal implications of expensive and poorly considered climate and energy policies,” recently released a report (pdf), “Restarting UK Shale Gas,” that argues that the UK should expand its fracking to avoid “[shivering] in the dark as we nibble our limited supplies of raw food—not quite the point of having a [civilization] in the first place.”

“Russia’s actions are likely to make the search for energy independence more intensive. Whether that will include the licensing of fracking depends upon how much good sense the British government shows on the subject,” Tim Worstall, a senior fellow at the Adam Smith Institute and author of the Net Zero Watch report, told The Epoch Times in an email.

Lakings of IIR Energy said the invasion “will change the very nature of the energy transition itself,” noting that it has provided incentives for U.S. regulators to approve more domestic oil and gas production.

Europe “will have to think how closely they are tied to Russia for energy,” he said.

“Now they will have to pivot.”

The Epoch Times has reached out to energy researchers known for their advocacy of net-zero policies, but didn’t hear back by press time.