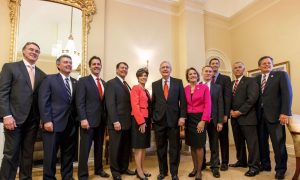 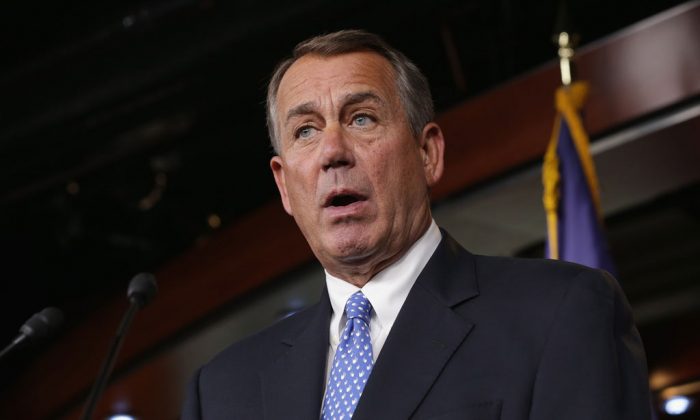 Speaker of the House John Boehner (R-OH) holds a news conference with the newly-elected members of the House GOP leadership at the US Capitol Nov. 13, 2014, in Washington, DC. (Chip Somodevilla/Getty Images)
Politics

WASHINGTON—Kentucky Sen. Mitch McConnell joined House Speaker John Boehner of Ohio on Thursday at the pinnacle of the congressional and Republican power structures in Washington — two establishment deal-cutters, each on occasion frustrated by the other’s inability to rein in their party’s most zealous ideologues.

The pair, formally selected Thursday to lead their party’s new majority control of Congress, will be charged with guiding Republicans on Capitol Hill for the final two years of President Barack Obama’s presidency. Their success or failure could determine whether the GOP can take back the White House in 2016.

McConnell, 72, is taciturn and rarely cracks a smile. “Why don’t you get a life?” he joked to photographers trying to snap photos of him after he was unanimously chosen by his Senate GOP colleagues Thursday to serve as the new majority leader starting in January.

Boehner, 64, is gregarious, chain-smoking, perpetually tan and fanatical about golf, which McConnell does not play.

But both are seasoned pragmatists steeped in the ways of Washington. They’ve served together in leadership roles for the past eight years and hail from the same region of the country.

Republicans hope their political similarities will help them to avoid conflicts that have emerged in past relationships between a speaker and Senate majority leader of the same party, due to the inherent tensions between the majority-rule House and the slower-moving Senate where minority members have numerous rights.

“With these two guys I don’t see that being a problem,” said Sen. Chaxby Chambliss, R-Ga., “They’re both pragmatic politicians, they’re good about setting their priorities and doing things that they know are realistic and not things that are out of reach.”

Their relationship is about to be tested like never before.

Days into Congress’ lame-duck session, conservatives newly emboldened by last week’s election already have served notice that their cooperation is not guaranteed. They announced this week they want to use upcoming must-pass spending bills to block Obama from taking executive action to curb deportations of immigrants in the country illegally.

Both McConnell and Boehner have stood down tea party challenges in the past, and emerged with a tighter grip on the reins of power after navigating the fiscal cliff and last year’s 16-day partial government shutdown over Obamacare.

Pragmatists warn of the potential for another shutdown but some of the party’s most committed ideologues are looking how McConnell and Boehner handle immigration as an early test of their leadership.

“The will of the conference is clearly very conservative. The election, what we heard from the American people, was clearly a very conservative message,” said Rep. Matt Salmon, R-Ariz., who’s leading the House effort to block Obama on immigration. “So my guess is that if they want to carry that leadership beyond the next term and win the White House, that we will not march in place, that we will be bold, that we will put difficult things on the president’s desk and not just second-guess what he is willing to sign.”

Boehner and McConnell have been here before. A year ago, tea party-backed House conservatives goaded by Sen. Ted Cruz, R-Texas, and cheered on by outside conservative groups forced a 16-day partial government shutdown over Boehner’s objections in an unsuccessful attempt to defund Obama’s signature health care law.

It didn’t work, and Republicans took a political hit, though it turned out to be short-lived. Aides believe the failure of the strategy ultimately strengthened Boehner’s hand and pulled House conservatives into line.

Whether that lesson will stay learned remains to be seen. it’s just one of the competing priorities Boehner and McConnell have to manage as they face the next two years.

McConnell is dealing with a group of White House hopefuls in the Senate — Marco Rubio of Florida, Ted Cruz of Texas, Rand Paul of Kentucky and possibly Rob Portman of Ohio, along with a group of Republicans in Democratic-leaning states who are up for re-election in 2016 and may be looking to move to the center.

Boehner has a large group of restive tea party-backed members to deal with who may have unrealistic expectations that the GOP’s newfound control of the Senate means pent-up legislation will finally sail through.

That fundamental institutional difference between the House and Senate has produced tensions between past pairings of leaders from the same party, including now-Senate Majority Leader Harry Reid of Nevada and House Democratic Leader Nancy Pelosi of California, when she was speaker, or Speaker Newt Gingrich and Majority Leader Bob Dole, who had little regard for each other.

“They have the same challenge: how do you deal with a caucus that’s hard to manage?” said John Feehery, a Republican consultant who worked on Capitol Hill for former House Speaker Dennis Hastert. “Their goal is to get some things done but also have the opportunity to capture the White House. Obviously the clock is ticking.”

Senate Democrats on Thursday re-elected Reid, whose title will change to minority leader in January.

At least five Democrats in the secret-ballot election voted against him — Claire McCaskill of Missouri, Joe Manchin of West Virginia, Heidi Heitkamp of North Dakota, Mark Warner of Virginia and Mary Landrieu of Louisiana, who faces an uphill battle to retain her seat in a runoff election next month.

Pelosi is expected to retain her post when House Democrats hold their leadership vote next week.

From The Associated Press. AP writers David Espo and Andrew Taylor contributed to this report.