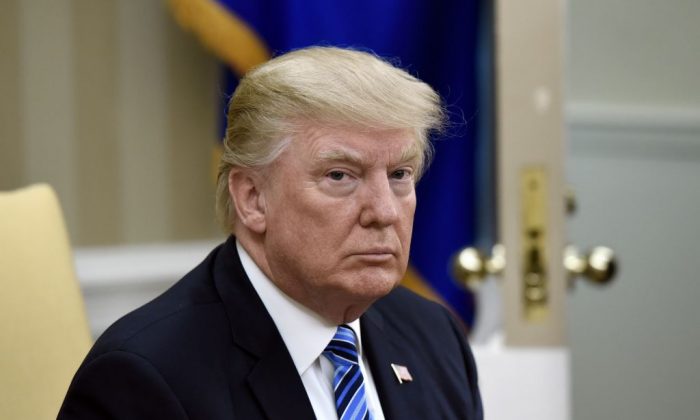 U.S President Donald Trump looks on during a meeting with South Korean President Moon Jae-in in the Oval Office of the White House on June 30, 2017 in Washington, DC.(Olivier Douliery - Pool/Getty Images)
Trump Administration

NATO Secretary General Jens Stoltenberg said President Donald Trump’s repeated calls for other countries to increase their financial contributions have made a real impact after member nations agreed to fork out tens of billions of dollars in additional funding to their defense budgets.

Stoltenberg, speaking to “Fox News Sunday” on Jan. 27, said Trump has made clear his commitment to NATO and his request for allies to invest more. During his 2016 campaign and throughout his presidency, Trump continued to press members to spend more on their own defense rather than rely on U.S. forces and money for protection.

At a July 2018 meeting in Brussels, Trump pressed allies to fulfill their commitment to spend 2 percent of their gross domestic product on defense by 2024.

“At the summit in July last year, we agreed to do more to step up and now we see the results,” Stoltenberg said. “By the end of next year, NATO allies will add hundred–100 billion extra U.S. dollars toward defense. So we see some real money and some real results.”

Turning to Twitter the same day, Trump promoted Stoltenberg’s comments and lambasted the “fake news” media for their claiming Trump’s calls for more spending from allies was hurting the alliance.

“Jens Stoltenberg, NATO Secretary General, just stated that because of me NATO has been able to raise far more money than ever before from its members after many years of decline,” the president wrote. “It’s called burden sharing. Also, more united. Dems & Fake News like to portray the opposite!”

Stoltenberg acknowledged that Trump’s comments were putting pressure on NATO but said his critiques were needed to combat Russia.

“What he’s doing is to help us adapt the alliance, which we need because we live in a more unpredictable world with a more assertive Russia using violence and force against a neighbor, Ukraine,” Stoltenberg said. “And therefore NATO has to adapt.”

“The responsibility to preserve the treaty lies on Russia because Russia is now violating the treaty by developing and deploying new missiles,” Stoltenberg said.