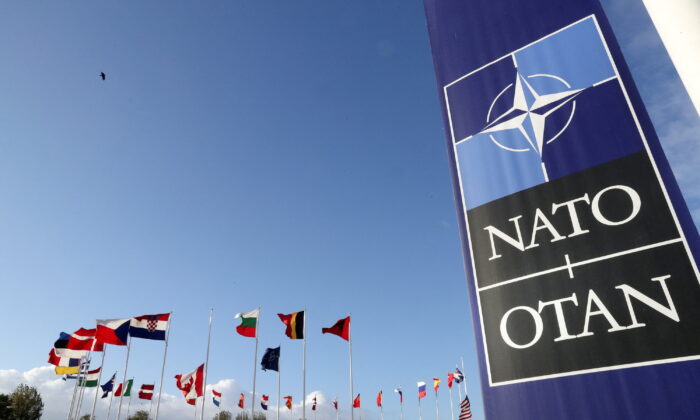 Flags wave outside the Alliance headquarters ahead of a NATO Defence Ministers meeting, in Brussels, Belgium, on Oct. 21, 2021. (Pascal Rossignol/Reuters)
Europe

The United States and 11 other members of the NATO alliance have begun large-scale naval exercises in the eastern Mediterranean Sea in a crisis-response exercise dubbed “Dynamic Mariner.”

Dynamic Mariner is “held in conjunction with the Turkish Navy’s Exercise Mavi Balina, which brings together 12 Allied nations off the coast of Turkiye,” according to a statement from officials. The exercise, which began on Sept. 11, will run to Sept. 22.

A total of 50 surface units, five submarines, five air assets (including maritime patrol aircraft and helicopters), 1,500 Marines, and other personnel from across the 12 NATO nations of Belgium, Bulgaria, Canada, France, Germany, Greece, Italy, Poland, Romania, Spain, Turkey, and the United States are participating.

It’s unclear exactly how many U.S. ships and Navy personnel are taking part, although officials stated that Standing NATO Maritime Group 2, which is led by the flagship destroyer USS Forrest Sherman, is involved.

According to a statement from the U.S. Navy, the exercise will “include training in specific skillsets to include surface, air, anti-submarine warfare (ASW), anti-surface warfare (ASuW), mine countermeasures, amphibious, hybrid, and force protection operations.”

The exercise comes as tensions between Russia and NATO have soared following President Vladimir Putin’s decision to invade Ukraine in February, which prompted the West to unleash a series of strict sanctions.

Dynamic Mariner will place a number of NATO vessels in a region that has seen an increased Russian naval presence.

‘No Aggressive Behavior From Russian Ships’

In a previous statement this month, NATO said it had been monitoring three Russian Navy ships transiting the North Sea, English Channel, and Celtic Sea but that its forces hadn’t seen “any aggressive behavior from the Russian ships,” and they remain “vigilant and continuously adapt to changing tactical situations.”

“Dynamic Mariner is an incredibly important large-scale maritime exercise,” MARCOM Deputy Commander French Navy Vice Adm. Didier Piaton said in a statement on Sept. 12. “This year’s event includes more assets than ever before, facilitating increased interoperability between our nations and enhancing operational readiness. We continue to work closely with Türkiye and other Allies and Partners to deter aggression and defend the Alliance.”

In August, Putin listed NATO and the United States as Russia’s main maritime threats, in an updated naval doctrine signed on July 31. The Russian president vowed to protect Russia’s borders “firmly and by all means” while signing the new decree, adding that “America’s course towards dominance in the World Ocean” and NATO’s movement closer toward his country’s borders were major security threats to Russia.

“The major challenges and threats to the national security and the sustainable development of the Russian Federation related to the World Ocean are: the U.S. strategic course towards dominance in the World Ocean and its global influence on international processes, including those related to the use of transportation lanes and energy resources of the World Ocean,” reads the document, which was translated by the state-run Tass news agency.

It added that “NATO’s plans of moving its military infrastructure close to the Russian borders and the alliance’s attempts to assume global functions” continue to be “unacceptable” to Russia and “remain a determining factor in its relations with NATO.”

The latest joint exercise comes as Ukraine vowed to take back all of its territories on Sept. 13, with Ukrainian President Volodymyr Zelenskyy claiming the country’s forces had already reclaimed large swaths of Russian-occupied territory in a recent offensive.