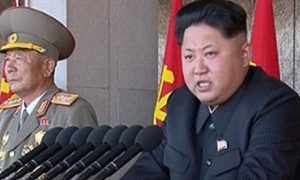 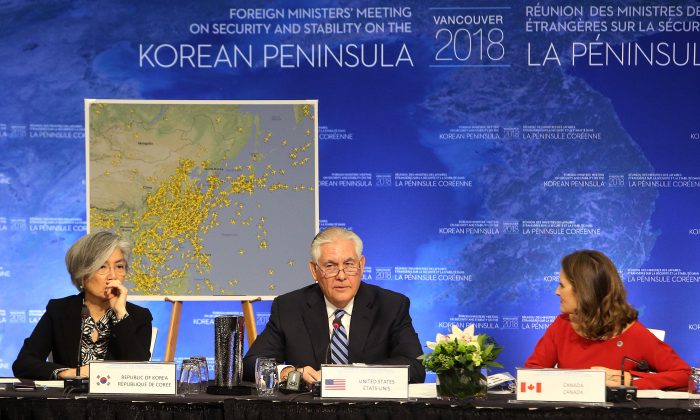 U.S. Secretary of State said Kim Jong Un must not be allowed 'to drive a wedge' between nations
By Reuters
Print

VANCOUVER—Twenty nations agreed on Tuesday to consider tougher sanctions to press North Korea to give up its nuclear weapons and U.S. Secretary of State Rex Tillerson warned there must be “new consequences” to any new acts of aggression.

A U.S.-hosted meeting of countries that backed South Korea during the 1950-53 Korea War also vowed to support renewed dialogue between the two Koreas “in hopes that it leads to sustained easing of tensions” and agreed that a diplomatic solution to the crisis was both essential and possible.

North Korean leader Kim Jong Un has refused to give up development of nuclear missiles capable of hitting the United States in spite of increasingly severe U.N. sanctions.

The United States and Canada co-hosted the day-long meeting in Vancouver to discuss ways to increase pressure on Kim.

Tillerson brushed off a question about a potential pre-emptive strike on a North Korean nuclear or missile site, telling a closing news conference: “I’m a not going to comment on issues that have yet to be decided among the National Security Council or the president.”

However, he said the threat posed by North Korea was growing.

“We all need to be very sober and clear-eyed about the current situation … We have to recognize that the threat is growing and if North Korea does not chose the pathway of engagement, discussion, negotiation, then they themselves will trigger an option,” Tillerson said.

“Our approach is, in terms of having North Korea chose the correct step, is to present them with what is the best option – talks are the best option; that when they look at the military situation, that’s not a good outcome for them.”

“It is time to talk, but they have to take the step to say they want to talk.”

The Vancouver meeting pledged to ensure that U.N. sanctions already in place were fully implemented and the participants said in a joint statement they agreed “to consider and take steps to impose unilateral sanctions and further diplomatic actions that go beyond those required by U.N. Security Council resolutions.” They gave no details.

Tillerson said all countries needed to work together to improve interdiction of ships attempting to skirt sanctions and said there must be “new consequences” for North Korea “whenever new aggression occurs.”

He said the meeting had agreed that China and Russia, which did not attend the Vancouver talks and sharply criticized them, must fully implement U.N. sanctions.

U.S. officials say discussion of a military strike option has lost some momentum since North and South Korea held formal talks for the first time in two years this month and Pyongyang said it would send athletes to the Winter Olympics that South Korea will host next month.

‘Not time for reward’

Japanese Foreign Minister Taro Kono said in Vancouver that the world should not be naive about North Korea’s “charm offensive” in engaging in talks with the South.

“It is not the time to ease pressure, or to reward North Korea,” he said. “The fact that North Korea is engaging in dialogue could be interpreted as proof that the sanctions are working.”

South Korean Foreign Minister Kang Kyung-wha said she hoped the dialogue would continue well beyond the Olympics, but stressed that existing sanctions must be applied more rigorously.

Tillerson said North Korea must not be allowed “to drive a wedge” through allied resolve or solidarity and reiterated Washington’s rejection of a Chinese-Russian proposal for the United States and South Korea to freeze military exercises in return for a freeze in North Korea’s weapons programs.

A senior State Department official said U.S. Defense Secretary Jim Mattis briefed the Vancouver participants over dinner on Monday and stressed the U.S. preference for a diplomatic solution, while keeping a military option on the table.

“It was a chance to raise people’s confidence that we have thought through this, that we definitely prefer a diplomatic solution,” the official said.

Russia and China have been accused of not fully implementing the U.N. sanctions, something they deny.

A U.S. official said Susan Thornton, the State Department’s senior diplomat for East Asia, would travel to Beijing from Vancouver to brief China on the outcome. He said he expected Tillerson to provide readouts to his Russian and Chinese counterparts.