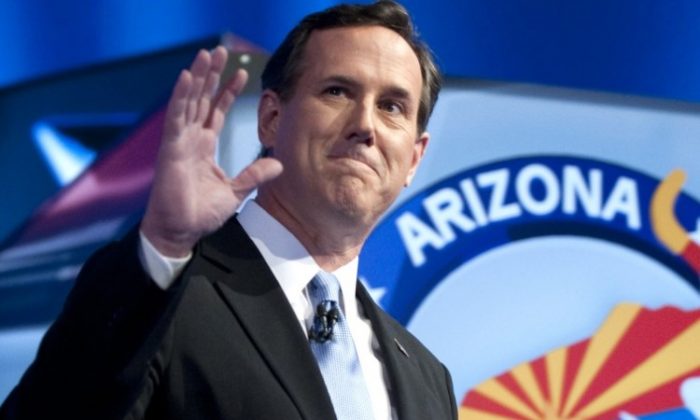 Republican presidential candidate Rick Santorum waves as he arrives to the debate hall on Feb. 22 in Mesa, Ariz. According to a Quinnipiac University Poll, Rick Santorum emerged the front-runner among the Republican presidential candidates with 35 percent, compared to former Massachusetts Gov. Mitt Romney with 26 percent. (Don Emmert/AFP/Getty Images)
US

The survey contacted registered voters who are Republicans or Independents who lean Republican.

However, the rankings and percentages may have been impacted by Santorum’s defensive performance at CNN’s GOP candidates’ debate.

Santorum’s nine-point lead is solid, based on the large sample size and margin of error, said Peter Brown, assistant director of the Quinnipiac University Polling Institute. Brown spoke on Feb. 22 at the National Press Club.

The survey also took account of a head-to-head matchup with President Obama. “Both Rick Santorum and Mitt Romney are in a statistical dead heat with the president,” Brown said. If Romney were the nominee and the election were held today, Obama has 46 percent to Romney’s 44 percent, a difference which is within the margin of error.

The president has a slight edge on Santorum, 47 to 44 percent. With Romney versus Obama, the numbers have held steady over time. In August 2011, the match showed no difference with 45 percent for each.

The statistical tie or almost tie in the matchups with Obama is important for another reason. The harsh criticisms the candidates have unleashed on each other in negative advertising and during the debates don’t appear to hurt the Republican vote on the head-to-head contest in November, observed Brown. Many pundits have conjectured that the negative advertising would hurt the Republican nominee in November.

This survey may have more credibility than many other surveys. Quinnipiac University polls have a reputation for their accuracy. This survey, conducted during the week of Feb. 14–20, surveyed 2,605 of Democrat, Republican, and Independent registered voters—a much larger sample size than most national polls, yielding a margin of error of +/- 1.9 percentage points. For just the Republican primary, the sample of Republicans or Independents leaning Republican was 1,124 voters with a margin of error of +/- 2.9 percent.

Additionally, cellphones were used in addition to landlines. Brown said that almost 30 percent of the population only own cellphones. The Quinnipiac survey included cellphone users, which is very expensive to do, according to Brown. Including the mobile phone users likely eliminates some bias in the sample.

Where is Santorum’s appeal coming from? Nearly two-thirds of Republican voters and Independents who lean Republican are “Born-Again Evangelicals,” according to the survey. Among white born-again Evangelicals, Santorum is chosen by 45 percent compared to Romney at 19 percent, Gingrich at 15 percent, and Paul at 6 percent. The pattern is much the same with voters who identify with the Tea Party. Santorum has nearly half of this group with 47 percent, and the remainder is split between the other three candidates.

Brown misspoke about the importance of men in Santorum’s appeal. The Quinnipiac survey data shows almost the same preference for Santorum by men (35 percent) and women (34 percent). But Romney appeals more to women (28 percent) than to men (24 percent).

Romney is clearly preferred by high-income voters. Republican and leaning Republican voters, who say their income is over $100,000, prefer Romney, 41 percent, to Santorum, 29 percent. Gingrich and Paul are way back at 13 and 7 percent, respectively.

Because Santorum has front-runner status, it was to be expected that the challengers would go on the attack. Ron Paul and Mitt Romney were very aggressive, forcing Santorum to defend his record during his period in the House and two terms as senator.

Romney accused Santorum for being responsible for the enactment of the Affordable Care Act (ACA), which Republicans prefer to call Obamacare that was signed into law in March 2010. Romney said that Santorum supported former Sen. Arlen Specter, the other senator from Pennsylvania, during the Republican primary over Pat Toomey, who is now a Pennsylvania senator. Specter, a moderate, later switched to the Democratic Party and voted for the ACA. Santorum felt compelled to defend his support for a moderate over Toomey, a Tea Party favorite.

Paul criticized Santorum for voting for No Child Left Behind, which was an initiative of the Bush administration. Santorum, again was put on the defensive:

“I have to admit, I voted for that. It was against the principles I believed in, but, you know, when you’re part of the team, sometimes you take one for the team, for the leader, and I made a mistake.”

Boos then erupted from what appeared to be an audience dominated by pro-Romney supporters. Santorum would not back down.

He continued, “You know, politics is a team sport, folks,” referring to his allegiance to President George W. Bush.

The answers Santorum gave during the night could undermine his claim that he is a true conservative and opposed to big government.

On CNN, David Gergen said after the debate, “Mitt Romney was the winner by a significant margin. He came in better prepared. He remained on the offensive all night. He was able to go on the attack on Santorum very, very well.”

Gergen thought the night would help Romney in Michigan and Super Tuesday on March 6, when 10 states hold primaries. Gergen has served as a presidential adviser to presidents Nixon, Ford, Reagan, George H.W. Bush, and Clinton.

The survey asks hypothetically that if the primary came down to a choice between Santorum and Romney, whom they would choose. Santorum is favored at 50 percent to 37 percent, with 13 percent answering, “Don’t know” or “No answer.” Those who identify as conservative went 57 to 33 percent in favor of Santorum; moderates favor Romney by 47 to 35 percent. Respondents who identify with the Tea Party favor Santorum 66 to 26 percent.

At the moment it is not a two-person race, as neither Gingrich nor Paul show signs of dropping out. The survey asks the respondent to assume that no candidate has enough delegates to lock up the Republican nomination. It’s conceivable at this time that if all four candidates stay in the race that none could emerge with assurance of the nomination.

Respondents said 48 to 37 percent that it would be bad for the Republican Party if the convention nominated someone who didn’t run in any primaries. But they said overwhelmingly that the prospect of a brokered convention was not likely (84 percent versus 14 percent).

If the Republican Party nominated someone who didn’t run in the primaries, New Jersey Gov. Chris Christie was the most popular among a choice that included Christie, former Gov. Sarah Palin, Indiana Gov. Mitch Daniels and former Florida Gov. Jeb Bush.