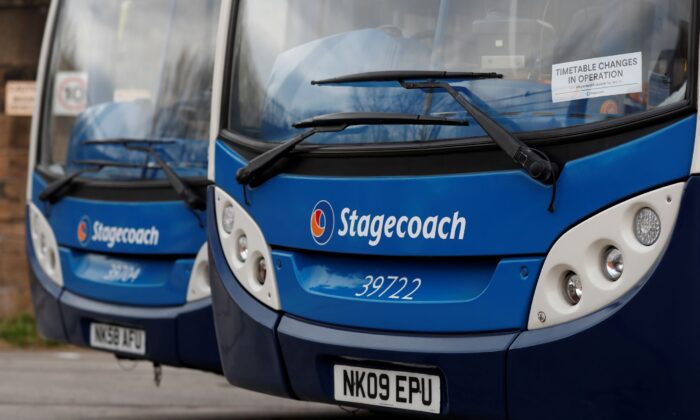 Parked busses are seen at a Stagecoach depot in South Shields as the spread of the coronavirus disease (COVID-19) continues, South Shields, Britain on April 3, 2020. (Lee Smith/Reuters)
Companies

National Express in Talks for All-Share Takeover of Stagecoach

LONDON—British transport company National Express is in talks to acquire rival operator Stagecoach Group in an all-share deal, offering scope for cost savings and underpinning their recovery from COVID-19.

The tie-up, which would value Stagecoach at about 445 million pounds ($609 million), comes as government support to help the companies get through the pandemic is due to expire.

National Express has bus and coach operations in Spain and Britain, runs school buses in the United States, and has a German rail contract.

Stagecoach, solely focused on Britain, is the country’s biggest bus and coach operator. The company was founded by Brian Souter and his sister Ann Gloag in Perth in 1980, starting out with just two buses bought with their father’s redundancy money.

They still own stakes in the company—Souter has about 14.55 percent and Gloag around 10.47 percent, based on Refinitiv data.

Under the terms of the potential takeover, Stagecoach shareholders would receive 0.36 new National Express shares for each Stagecoach share, giving them a 25 percent stake in the merged group.

That represents an 18 percent premium on the closing price of Stagecoach’s shares on Monday.

During the pandemic, both Stagecoach and National Express received government support to keep services running when passenger numbers were down, but that funding will end in the coming months.

Transport usage is starting to recover as workers return to offices, but is still not near its pre-pandemic levels.

The companies said the tie-up would make pre-tax cost savings of 35 million pounds per year through efficiencies such as National Express utilising Stagecoach’s depots for its coach operations.

Citi analysts said the deal would be positive for the transport sector. Rival UK operators FirstGroup and Go-Ahead also rose around 3 percent on news of the potential deal.

“We have argued for consolidation in the UK Public Transport given the structural challenges facing the industry, i.e. the pandemic impact on passenger volume and capex headwinds related to the adoption of environmentally-friendly vehicles,” Citi said in a note.

The companies said that discussions and due diligence remained ongoing and there could be no certainty of a formal offer.

Should a deal go ahead, Stagecoach’s chairman Ray O’Toole, a former chief operating officer at National Express, would become chair of the combined group, while National Express chief executive Ignacio Garat would continue as CEO of the merged entity. ($1 = 0.7310 pounds)