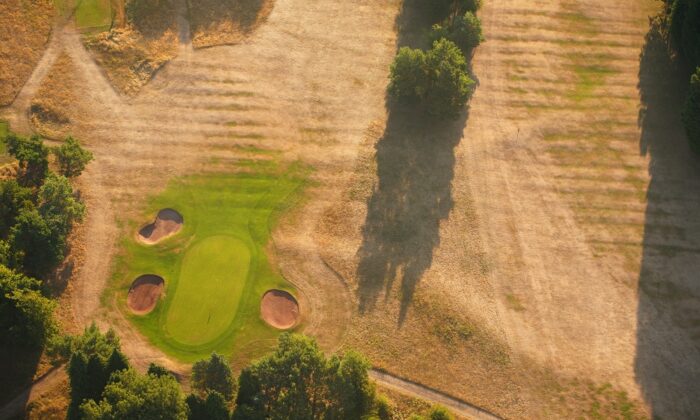 A splash of green amid the dried out fairways of Ashton Court Golf Course, near Bristol, on Aug. 12, 2022. (Ben Birchall/PA)
UK

A national drought has been declared in England, after a prolonged period of low rainfall from January to July 2022, the lowest since 1976.

The decision followed a meeting on Friday by the National Drought Group—which includes the National Farmers’ Union (NFU), water companies, and the Department for Environment, Food and Rural Affairs (Defra)—which was set up in 2012, after the driest 18 months for 100 years.

A statement on Defra’s website said: “It does not automatically trigger actions itself, but moving to drought status means that the Environment Agency and water companies will step up their actions to manage the impacts and press ahead with implementing the stages of their pre-agreed drought plans.”

Water Minister Steve Double said: “All water companies have reassured us that essential supplies are still safe, and we have made it clear it is their duty to maintain those supplies. We are better prepared than ever before for periods of dry weather, but we will continue to closely monitor the situation, including impacts on farmers and the environment, and take further action as needed.”

Companies have the power, under the Water Industry Act 1991, to impose a temporary bylaw to restrict the use of hosepipes to water flowers and lawns and wash cars but businesses are exempted if, for example, they need to water commercially-grown fruit and vegetables.

An amber warning for extreme heat in most of southern England, the Midlands, and eastern parts of Wales, running through until midnight on Sunday, has been issued by the Met Office.

A dry winter and spring, combined with July’s record-breaking heatwave, has depleted reservoirs, rivers, and water tables, leading to concerns about whether domestic consumers would run out of water in the autumn.

In 29 percent of the English rivers which are regularly measured, levels are classed as “exceptionally low.”

The NFU said many farmers were reporting crops such as sugar beet and maize were showing “signs of stress” because of the drought and field vegetables and potatoes, which need irrigation, are also struggling. If crops fail it could lead to an increase in the price of sugar, potatoes, carrots and broccoli.

NFU deputy president Tom Bradshaw said it was “hugely challenging” for farmers who were also having to use winter feed supplies for animals because so much of the grass in the fields has shrivelled up.