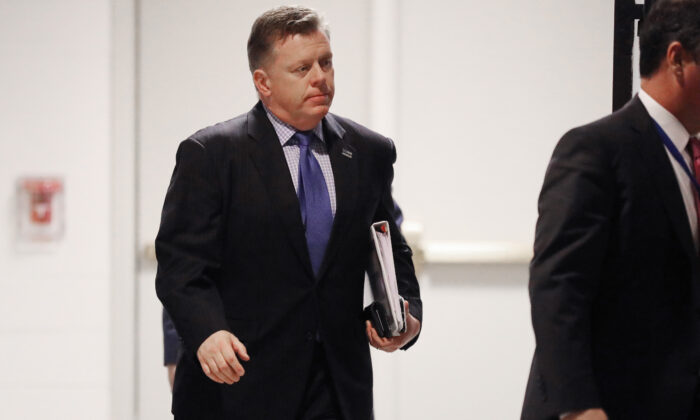 The National Archives and Records Administration (NARA) on July 19 asked the Secret Service to investigate the deletion of texts sent around the time the U.S. Capitol was breached on Jan. 6, 2021.

The Secret Service texts were erased as part of a “device-replacement program,” a watchdog announced this month. The deletions happened after the watchdog, Department of Homeland Security Inspector General Joseph Cuffari, requested the records as part of its evaluation of the events surrounding the breach, according to Cuffari.

The Secret Service has said none of the records that were deleted were among the materials Cuffari was seeking.

If any texts were “improperly deleted,” then the service must send the National Archives a report by Aug. 19 documenting the deletion.

“This report must include a complete description of the records affected, a statement of the exact circumstances surrounding the deletion of messages, a statement of the safeguards established to prevent further loss of documentation, and details of all agency actions taken to salvage, retrieve, or reconstruct the records,” Brewer said.

Anthony Guglielmi, a spokesman for the service, told The Epoch Times in an emailed statement that the service will cooperate with NARA.

“We will complete the internal review of our information as directed and promptly respond to their inquiry,” he said.

Cuffari, a Trump appointee, alerted top lawmakers of the deletions in a July 13 letter, emphasizing that the deletions happened after his office requested them.

One of the lawmakers, Sen. Rob Portman (R-Ohio), told The Epoch Times via email that he was “deeply concerned” by the revelations and urged the Department of Homeland Security, the Secret Service’s parent agency, to be transparent with the watchdog, Congress, and the public.

A Secret Service spokesperson has said that “the insinuation that the Secret Service maliciously deleted text messages following a request is false.”

“DHS OIG requested electronic communications for the first time on Feb. 26, 2021, after the migration was well under way,” the spokesman added. “The Secret Service notified DHS OIG of the loss of certain phones’ data, but confirmed to OIG that none of the texts it was seeking had been lost in the migration.”

Official business conducted on cell phones are captured on platforms for preservation purposes, according to the agency.

The House of Representatives panel investigating Jan. 6 later subpoenaed the agency for the records, “as well as any after action reports that have been issued in any and all divisions of the USSS pertaining or relating in any way to the events of January 6, 2021.”