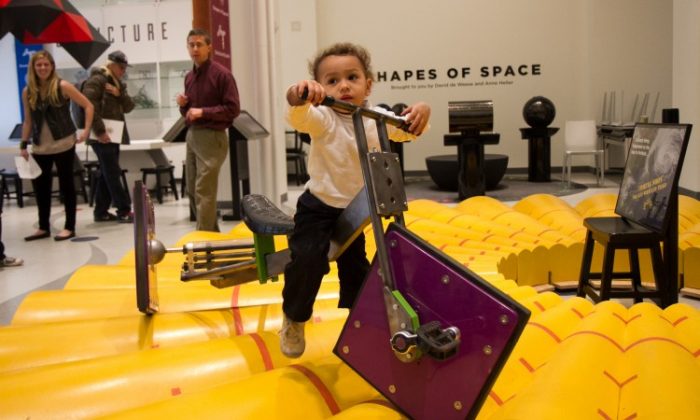 A little boy attempts to use a square-wheeled tricycle at the MoMath Museum in New York, Dec. 13. (Benjamin Chasteen/The Epoch Times)
US

“How can you possibly have a square-wheeled tricycle?” he asked rhetorically.

Mathematics—that’s how. Whitney said a mathematical theorem says there is a road for every wheel.

“The power of mathematics allows you to discover a way that you can do the seemingly impossible and make it possible,” said Whitney, founder and executive director of the National Museum of Mathematics (MoMath) in the Flatiron District.

Whitney’s path through the field of math has taken several turns, leading from childhood memories of math learning made fun, to math studies at Harvard, and a Ph.D. in mathematical logic from UCLA. But the latest is definitely the most interesting yet.

Whitney and a team have created MoMath, with the goal of inspiring people—mainly children—to learn more about math.

“We want to send a message that it’s cool to love math,” Whitney said in a document describing his inspiration for the museum, which features over 40 exhibits.

MoMath is located just north of Madison Square Park in the Flatiron District. It opens to the public on Dec. 15.

The square-wheeled tricycle is one of more than a dozen exhibits that approach math a little differently than we’re all used to.

There’s the “Mathenaeum,” where you can create a custom shape with a lateral joystick, lever, and big mouse-pad-ball combination (if your design gets enough votes it will be printed from a 3-D printer the next day); the “Human Tree” (stand in front of a screen and see what it means); and the “Hyper Hyperboloid,” a circle of straight cords surrounding a swivel chair (swiveling in the chair makes the cords twist inward into a curved shape).

“This shows you how you can build a curved tower out of steel beams,” said Whitney, sitting in the swivel chair. The curved shape, similar to an hourglass with an expanded middle section, demonstrates what can be learned through math, he said. Whitney swiveled the cords back into straight lines, to a cylinder shape.

“This is something that’s very familiar,” he said. “It goes from the familiar into the unfamiliar, which is exactly the discovery process that we want people to have in the museum.”

Some of the exhibits didn’t function during the press preview on Thursday, mostly because the preparation timeline was thrown off by Sandy, said Whitney. A representative said all exhibits would be ready for the opening.

Next to exhibits are screens where people can learn more about the history of them, including the inventors behind the math concepts, as well as different problems to solve relating to each area. At the “Mathenaeum,” for example, the screen taught that Euclid (sometimes called the “father of geometry”), the famed astronomer Johannes Kepler, and the Greek philosopher Plato have all made important discoveries relating to geometric shapes.

The screens help deepen learning and the conversation about what exhibits children will find most interesting, said Tim Nissen, chief of design at the museum.

Parents who spend time at an exhibit can learn about what their child is doing and have a more meaningful discussion with them afterwards, Nissen said.

Whitney agreed the museum is for adults too. Once the museum is up and running, they will likely extend operating hours on at least one night a week.