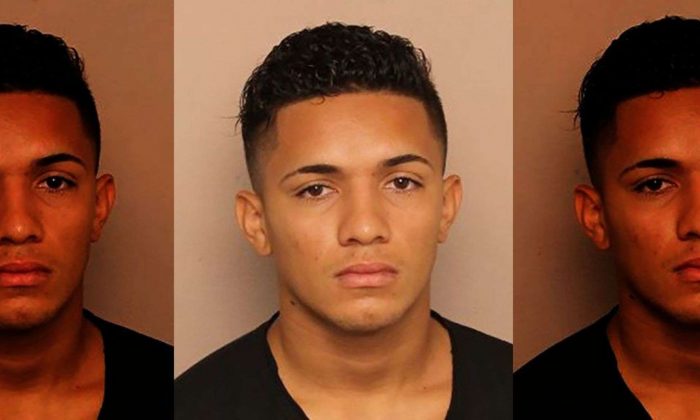 Nashville Man Tries Robbing Woman Before Her Husband Shoots Him

The husband of an attempted robbery victim in Nashville chased down the would-be thief and opened fire on the suspect, police said.

The suspect, 19-year-old Jordan Ponce, approached a 25-year-old woman walking home on the night of Feb. 4 at about 9:30 p.m., Metro Nashville Police said in a press release cited by Fox News. The incident took place at the Baker Station Apartments in South Nashville, according to local outlet WKRN.

Ponce allegedly ran up to the woman from behind and tried to steal her purse. But when she wouldn’t let go, the suspect bashed her head against a building wall, according to the release, prompting her to scream.

The woman’s 29-year-old husband heard the screams and rushed out of the apartment to intervene.

Police spokesman Don Aaron was cited by the Tennessean as saying that the husband leaped over a railing and landed on top of the suspect, after which the two men struggled.

Ponce reportedly disengaged and fled running toward a parking lot, police said. The husband ran after him, and the two men reportedly got into a second fight. At one point Ponce hit the woman’s husband in the head and got up, according to the Tennessean.

The husband told the police that he was concerned about what Ponce might do then, so the husband pulled out a gun and opened fire.

One bullet struck Ponce in the abdomen.

Police said Ponce then fled the area in a silver Acura. He was later dropped off in the same vehicle at TriStar Southern Hills Medical Center, police said, adding that Ponce is understood to have suffered a serious injury.

The 25-year-old attempted robbery victim was treated at Summit Medical Center for cuts and bruises to her head, according to ScoopNashville.

Police later discovered that the silver Acura that Ponce was dropped off in at the medical center had been stolen.

Fox reported that the police said the vehicle was stolen 90 minutes before the attempted robbery. Investigators reportedly located the car the following day.

A police representative told Fox News on Tuesday that Ponce remained in hospital and was being treated for wounds to his hands and stomach.

Ponce is expected to face charges, the department representative told Fox, adding that she was not aware of any expected charges against the husband who intervened and shot the suspect.

UPDATE: Warrants have been issued for 19-year-old Jordan Ponce, who is accused of attacking a woman in an attempted robbery in Antioch. He will be booked when he's released from the hospital. https://t.co/EKwJH96e2a

The outlet reported that Ponce has one previous charge dating back to 2017, for no driver’s license. That charge was later dismissed.

The Tennessee Highway Patrol told WKRN that the individual who contacted the Metro police to call in the incident was an off-duty trooper.

According to the Metropolitan Nashville Police Department, which compiles yearly crime statistics, the Nashville area saw an increase from 2016 to 2017 (the most recent year of available data) in multiple categories of crime.

The Metro police explained that the statistics provided don’t include all types of crime, explaining that “these Part I crimes include eight selected crime classifications (murder and nonnegligent manslaughter, forcible rape, robbery, aggravated assault, burglary, larceny-theft, motor vehicle theft, and arson ) because they are the crimes most likely to be reported, they are most likely to occur with sufficient frequency to provide an adequate basis for comparison, and are serious crimes by nature.”

The police noted that the above types of crime “are the immediate focus of police activity.”

The figures show that motor vehicle theft grew between 2016 and 2017 by 49.06 percent. This is the category that saw the most dramatic rise.

The second most substantial growth in crime rates in Nashville pertained to murder and nonnegligent homicide, which grew from 83 incidents in 2016 to 111 incidents in 2017. This represents a growth of 33.73 percent.

Aggravated assaults using firearms are up 25.6 percent, the category seeing the third-highest uptick.

Instances of aggravated assaults using “Hands, Fists, etc.—Aggravated injury,” however, saw the most substantial fall in frequency, with figures showing a drop of 18.10 percent.