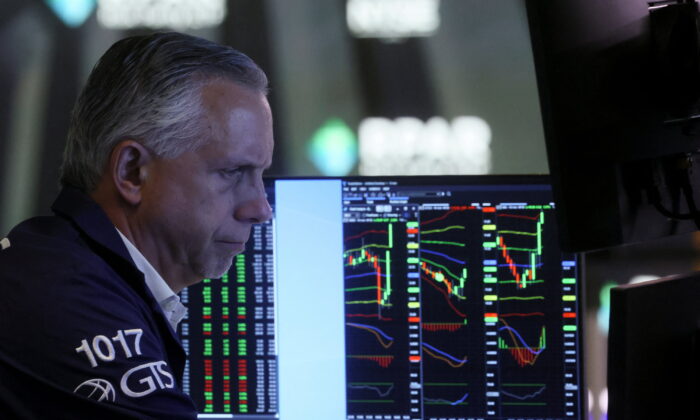 NEW YORK—U.S. stocks added to their recent rally on Friday after upbeat forecasts from Apple and Amazon.com, and the S&P 500 and Nasdaq posted their biggest monthly percentage gains since 2020.

Apple Inc. shares gained 3.3 percent after the company said parts shortages were easing and that demand for iPhones was continuing. Amazon.com Inc. shot up 10.4 percent after it forecast a jump in third-quarter revenue from bigger fees from its Prime loyalty subscriptions.

“In today’s market, the Amazon and Apple numbers are giving the market support (on) the idea that two large companies that are a large part of the S&P seem so far to be able to navigate through these tougher times,” said Rick Meckler, partner at Cherry Lane Investments, a family investment office in New Vernon, New Jersey.

Stocks have also rallied this week on investor speculation that the Federal Reserve may not need to be as aggressive with interest rate hikes as some had feared.

Second-quarter U.S. corporate results have mostly been stronger than expected.

Of the 279 S&P 500 companies that have reported earnings so far, 77.8 percent have exceeded expectations. Earnings for S&P 500 companies now are expected to have increased 7.1 percent in the quarter versus an estimated 5.6 percent at the start of July, according to IBES data from Refinitiv.

But on Thursday, a government report showed the American economy unexpectedly contracted in the second quarter, suggesting to some investors that the economy was on the cusp of a recession. They said it might deter the Fed from continuing to aggressively increase rates as it battles high inflation.

Volume on U.S. exchanges was 11.35 billion shares, compared with the 10.79 billion-share average for the full session over the last 20 trading days.

Advancing issues outnumbered declining ones on the NYSE by a 2.92-to-1 ratio; on Nasdaq, a 1.44-to-1 ratio favored advancers.