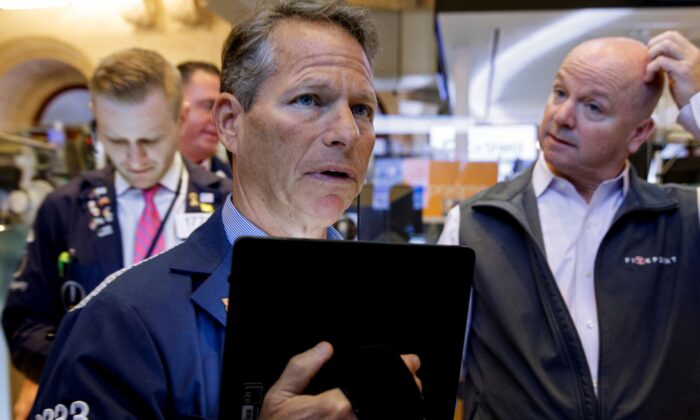 The Dow and the S&P 500 hit record highs on Friday following positive earnings from American Express, while the Nasdaq was pressured after social media giants including Facebook tumbled on Apple privacy tweak worries.

The benchmark index hit an intraday record for the second straight session and was set for weekly gains of 1.8 percent, extending a bullish run for the third consecutive week.

“The S&P is making new highs while we’re in the middle of the supply chain issue so the market is telling you ‘I know about this and I’m not worried’,” Eric Diton, managing director of investment advisory firm The Wealth Alliance, said.

“We’re still in a very low interest rate environment, coupled with a global economic recovery that is going to have fits and starts and a still accommodative Federal Reserve … that is not the input for a major bear market.”

Nine of the 11 major S&P 500 sector indexes were higher in the first hour of trading, while the communication services sector fell over 2 percent as it was hit by a slump in social media giants.

Intel Corp. tumbled 10.8 percent as it missed third-quarter sales expectations, while its chief executive officer pointed to shortages of chips holding back sales of its flagship processors.

Supply chain worries, inflationary pressures, and labor shortages have been at the forefront of the third-quarter earnings season. Analysts expect S&P 500 earnings to rise 34.8 percent year-on-year, with just over 100 companies having reported so far, according to data from Refinitiv.

Some analysts, however, said such worries will only have a temporary impact on earnings from mega-cap technology and communication companies this reporting season.

Snap plummeted 22.9 percent on the news and cast doubts over quarterly reports next week from Facebook and Twitter, social media firms that rely heavily on advertising revenue.

Mattel Inc. gained 0.8 percent after it raised its 2021 sales forecast on Thursday, saying it would overcome industry-wide shipping disruptions.

The S&P index recorded 74 new 52-week highs and no new low, while the Nasdaq recorded 90 new highs and 63 new lows.

By Shreyashi Sanyal and Devik Jain