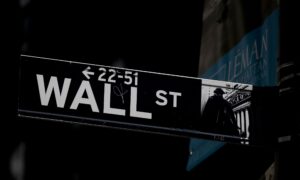 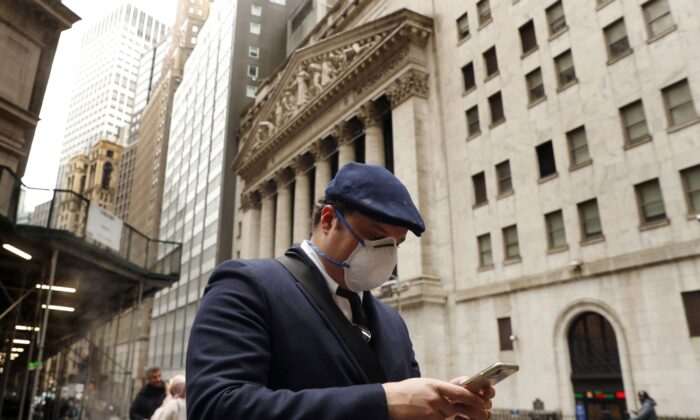 A man walks past the New York Stock Exchange on the corner of Wall and Broad streets in New York City, N.Y., on March 13, 2020. (Lucas Jackson/Reuters)
Markets

Wall Street Flat on Concerns Over Inflation Impact on Profits

U.S. stock indexes were trading largely flat in a choppy session on Tuesday on worries over the impact of rising inflation on upcoming third-quarter earnings, while Tesla gained after record China-made vehicles sales.

The communication services sector dropped 1.2 percent, while mega-cap growth names including Microsoft Corp., Apple Inc., Alphabet Inc., and Facebook Inc. weighed the most on the S&P 500 and the Nasdaq.

But Tesla added 1.8 percent after data showed the electric vehicle maker sold 56,006 China-made vehicles in September, the highest since it started production in Shanghai about two years ago.

Higher oil prices coupled with supply chain disruptions have set off alarm bells for businesses and consumers in the run-up to quarterly reports from companies, which will start with JPMorgan Chase & Co. on Wednesday.

Shares of JPMorgan were down 0.4 percent, with the banking sub-index easing after hitting a record high recently.

“Given all of the difficulties that companies are having to deal with, there is more of a chance for more negative surprises this quarter than there were in the previous quarters,” said Tom Martin, senior portfolio manager at Globalt Investments in Atlanta.

“We have had a good run here (year-to-date) so you can get continued back and forth across the markets, a lot of it is going to be this push and pull between inflation expectations, and potentially the dampening of growth.”

Analysts expect a 29.6 percent year-over-year increase in profit for S&P 500 companies in the third quarter, according to IBES data from Refinitiv as of Friday.

Investors also awaited the release of minutes from the Federal Reserve’s meeting on Wednesday for clues on the taper timeline, while inflation and retail sales data will be scrutinized to gauge the pace of economic recovery.

Fed Vice Chair Richard Clarida said the central bank has all but met its employment goal to move ahead with reducing its bond buying program.

Shares of Nike Inc. rose 0.8 percent after Goldman Sachs started coverage of the sportswear maker’s stock with a “buy” rating.

American Airlines added 0.6 percent after it forecast a smaller-than-expected adjusted net loss for the third quarter.