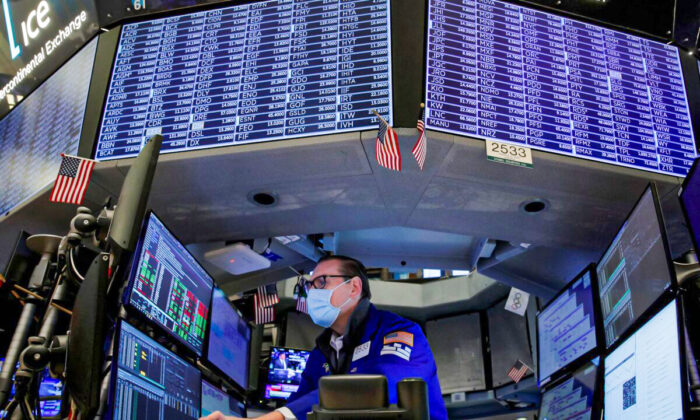 Microsoft Corp. gained 3.9 percent premarket after the Windows maker forecast revenue for the current quarter broadly ahead of Wall Street targets, driven in part by its Intelligent Cloud unit.

Texas Instruments Inc. rose 4.6 percent after the chipmaker forecast upbeat current-quarter revenue and said it would sharpen its focus on chips used in the lucrative automotive and industrial sectors.

The rate-sensitive tech and growth stocks have been roiled over fears of aggressive Fed action to combat inflation. Rising geopolitical tensions around Russia and Ukraine added to investors’ woes, with the S&P 500 index flirting with a correction twice this week.

The policy decision is due at 2 p.m. ET (1900 GMT), where the U.S. central bank is likely to signal the start of an interest rate hike cycle beginning March.

The announcement will be followed by Fed chairman Jerome Powell’s news conference, which will be parsed for clues on the magnitude and pace of hikes for the year and strategy for shrinking its roughly $9 trillion balance sheet.

Fed funds futures traders are pricing in a 25 basis point hike in March, in addition to three more rate increases by the end of the year.

“There is a greater chance we meet a confident, yet a comforting Fed,” said Ipek Ozkardeskaya, senior analyst at Swissquote Bank.

“The Fed hasn’t got anything to gain in sending out hawkish messages today: slaughtered equity markets won’t help them to get the inflation situation straight.”

The benchmark index is now down nearly 9.2 percent from its record closing peak on Jan. 3, while the tech-heavy Nasdaq has fallen 13.5 percent so far this year.

The fourth-quarter reporting season is in full stride, with 79 of the companies in the S&P 500 having reported. Of those, 81 percent have delivered better-than-expected results, according to Refinitiv.

Tesla Inc. added 4.3 percent ahead of its quarterly results after market close, while Boeing and Intel Corp. also climbed in the run-up to earnings later in the day.

Shares of all major Wall Street lenders gained more than 1 percent each.