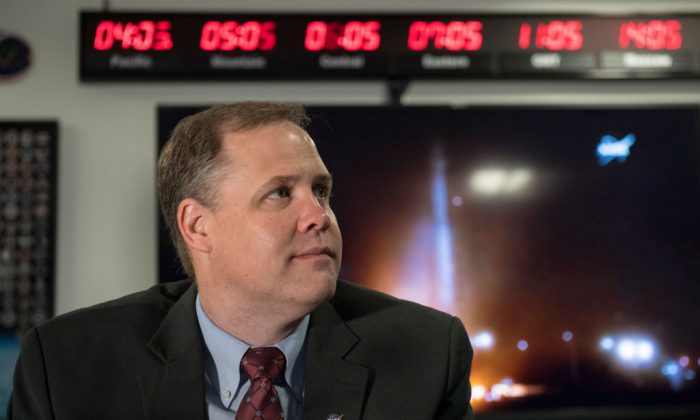 NASA may soon work to create an artificial refueling station to be placed in orbit around the moon, which can be used as a relay point for deep space exploration and to develop technologies for life support on Mars.

The plan was described by the newly appointed NASA administrator Jim Bridenstine in an interview on “The Cats Roundtable” on New York radio station AM 970 on June 3.

“When we start using the moon as a place from whence we can get fuel, that enables us to get further, and it reduces the cost to getting off the surface of the earth,” said Bridenstine.

Among the major roadblocks in deep space exploration is that it takes a tremendous amount of energy to propel vessels through earth’s gravity and into orbit.

“A lot of people don’t realize one of the most expensive parts of space exploration is just getting off the surface of the earth, because the gravity well is so large,” Bridenstine said.

“A lot of times we launch something into space, 80 percent of the weight that we launch is just the fuel to get whatever that device is into low earth orbit,” he said.

NASA plans to overcome this problem by building a refuel station in the moon’s orbit, using frozen water discovered on the moon’s surface.

“The moon has at its poles tens of billions of tons of water ice,” said Bridenstine, noting that NASA will take this water, and break it into hydrogen and oxygen. It can then use the oxygen to sustain life and use the hydrogen as fuel.

“You take the ice, you melt it into water, then you crack it into hydrogen and oxygen, and that represents life support from an oxygen perspective. You can breathe it. It also represents propulsion and power,” Bridenstine said.

“Hydrogen and oxygen, that’s the same fuel that powered the space shuttle. And that gives us opportunities to ultimately create power sources and propulsion on the surface of other worlds.”

Since the gravity on the moon is about a sixth of that on the earth, Bridenstine suggested that after NASA breaks the surface water ice into hydrogen and oxygen, they could then put these into orbit around the moon, and “ultimately that gives you potentially the propulsion capability to get you further into deep space without having to launch all of that fuel from earth.”

Developing these technologies could also fit well with President Donald Trump’s plan to create a manned mission to Mars.

Just like the moon, Mars also has stores of frozen water, which NASA discovered just beneath the surface of the planet.

He noted that part of the reason that NASA is again working toward a manned mission to the moon, and is experimenting with other moon-based technologies, is that the moon “is the absolute best proving ground for a Mars mission.”

“When you think about the moon, there are all kinds of things that we can learn. How do we sustain life on another world, when it comes to life support,” he said.

On Dec. 11, 2017, Trump signed his Space Policy Directive 1, which, according to NASA, provided a U.S.-led program that leveraged the private sector for manned missions to the moon and Mars.

“The directive I am signing today will refocus America’s space program on human exploration and discovery,” Trump said at the signing. “It marks a first step in returning American astronauts to the Moon for the first time since 1972, for long-term exploration and use. This time, we will not only plant our flag and leave our footprints—we will establish a foundation for an eventual mission to Mars, and perhaps someday, to many worlds beyond.”

Acting NASA administrator Robert Lightfoot said at the time, “This work represents a national effort on many fronts, with America leading the way. We will engage the best and brightest across government and private industry and our partners across the world to reach new milestones in human achievement.

“Our workforce is committed to this effort, and even now we are developing a flexible deep space infrastructure to support a steady cadence of increasingly complex missions that strengthens American leadership in the boundless frontier of space.”