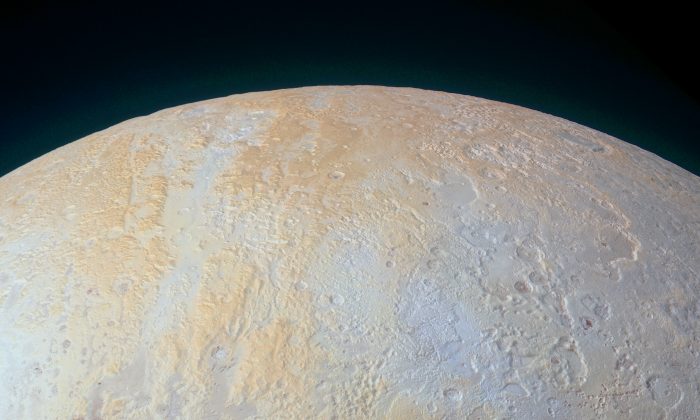 Taken from a height of 21,100 miles, the image, which was enhanced for color and released on Feb. 26, shows that Pluto’s North Pole contains long canyons, the widest being 45 miles wide (marked in yellow in the photo below).

The green markings in the photo below show other canyons that run parallel but are only an estimated 6 miles wide. According to NASA, these canyons appear to be much older, whereas the newer canyons are more sharply defined.

According to the space agency, the canyons appear to support the idea that there was an ancient period of tectonics on Pluto.

Pluto also has what NASA describes as large, irregular-shaped pits (marked in red in the photo above). “These pits may indicate locations where subsurface ice has melted or sublimated from below, causing the ground to collapse,” NASA said in a statement.

The New Horizons mission was launched on 2006 with the primary goal to answer questions about Pluto. The spacecraft flew by the planet on July 14, 2015.