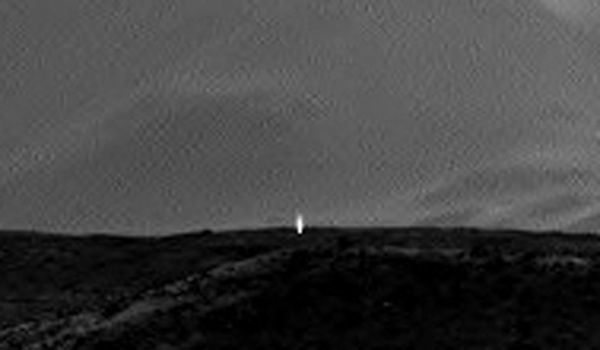 Image taken by the Curiosity Mars rover. (NASA)
Beyond Science

The Curiosity rover scanning the surface of Mars took a photo of what looks like an artificial light flaring up.

The rover was investigating The Kimberly, an area thought to have been particularly conducive to life at one time. The photo, taken last week, has excited UFO enthusiasts.

“Bad Astronomy” blogger Phil Plait, on the other hand, said it’s probably a cosmic ray. Subatomic particles in space that are blocked by our atmosphere on Earth can interfere with cameras in space leaving such a spot, he said.

“In space I see things that are not there. Flashes in my eyes, like luminous dancing fairies, give a subtle display of light that is easy to overlook when I’m consumed by normal tasks. But in the dark confines of my sleep station, with the droopy eyelids of pending sleep, I see the flashing fairies. As I drift off, I wonder how many can dance on the head of an orbital pin.”

NASA has not yet released a statement on the flash.

Photos of the same spot were taken by two separate cameras, one from a camera on the rover’s right side and the other on its left. The images from the camera on the left do not show the flash as those on the right do.