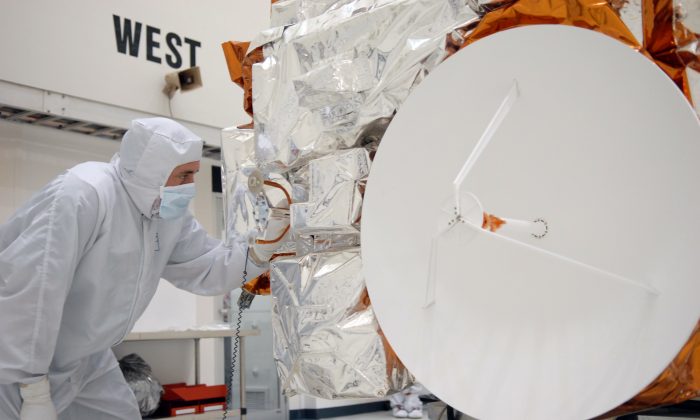 A Ball Aerospace technician looks over NASA's Kepler spacecraft, during a media event at the Astrotech Space Operations facility in Titusville, Fla. in 2009. An upcoming conference on the Kepler Space Telescope has aroused controversy, due to the U.S. government policy of excluding Chinese nationals. (NASA/Troy Cryder)
China

An upcoming NASA conference on telescope technology has been declared off limits to Chinese nationals, as the space agency reaffirms U.S. policy of not cooperating with the People’s Republic China’s militarization of space.

The Nov. 4–8 conference on NASA’s Kepler space telescope program is considered the year’s premier event for academics specializing in the search for planets outside the solar system, and the agency’s stand has drawn controversy.

The Guardian, a U.K.-based newspaper, reported that several researchers are boycotting the conference, due to NASA’s policy on excluding Chinese nationals.

NASA is obeying U.S. law, the language for which was first inserted in the bill funding the agency in April 2011 by Congressman Frank Wolf, chairman of the House Commerce, Justice, and Science Appropriations Subcommittee. It prevents NASA and the White House’s Office of Science and Technology Policy from using federal funds for diplomacy with China.

“I think Wolf did the right thing, but the Chinese government will take advantage of the naiveté of American academics and play to their natural distaste for exclusionary actions,” said Greg Autry, author of Death by China, in an email interview.

“The irony of all this is that everything real in China is locked down hard from access by Americans—or by most Chinese for that matter,” he said. “Everything in China is about restricting the freedom of people to participate.”

The regulation was renewed in March, but ran into similar backlash in the past.

In May 2011, two Xinhua journalists were turned away from a space launch at the Kennedy Space Center in Florida. Xinhua, a state-run newspaper operated by the Chinese State Council, published an article afterward accusing Wolf of going against cooperation between the United States and China.

Also in 2011, the White House science office had its funding cut by 32 percent after it went against Congress and ignored the regulation.

Wolf defended his position during a testimony to the U.S.–China Commission in May 2011. He noted that China’s space programs are led by the People’s Liberation Army (PLA) and said “The U.S. has no business cooperating with the PLA to help develop its space program.”

Concern over China’s intentions for space technology were sparked by a January 2007 incident when, without warning, it destroyed one of its own satellites with a ground-based anti-satellite weapon and sent an estimated 2,500 pieces of debris spinning in orbit.

A State Department cable leaked by WikiLeaks details the U.S. response to the incident, including attempts to speak with China. It states that China gave “no sensible answer” to any nation regarding the weapons test.

It then states that the United States halted cooperation with China on space programs, noting, “One of the primary reasons for this position is the continued lack of transparency from China regarding the full range of China’s space activities.”

“PLA strategists regard the ability to utilize space and deny adversaries access to space as central to enabling modern, informatized warfare,” states the Pentagon’s 2013 review of China’s military developments.

The report notes, “Publicly, China attempts to dispel any skepticism over its military intentions for space,” yet internal doctrine speaks otherwise. It quotes a PLA analyst saying “space is the commanding point for the information battlefield,” and that “destroying or capturing satellites and other sensors … will deprive an opponent of initiative on the battlefield and [make it difficult] for them to bring their precision guided weapons into full play.”

It also quotes PLA writings, that “emphasize the necessity of ‘destroying, damaging, and interfering with the enemy’s reconnaissance … and communications satellites.’”

Autry said, “Most Westerners who are involved in Space research have a view of an open and peaceful future for all of humankind in space, led by brave and wise people–a la ‘Star Trek.’”

“Who in the world really wants to see mankind’s legacy in the universe represented by a brutal totalitarian regime?” he said. “We should welcome China to space when it has a civilized government worthy of representing human beings. Right now it does not.”