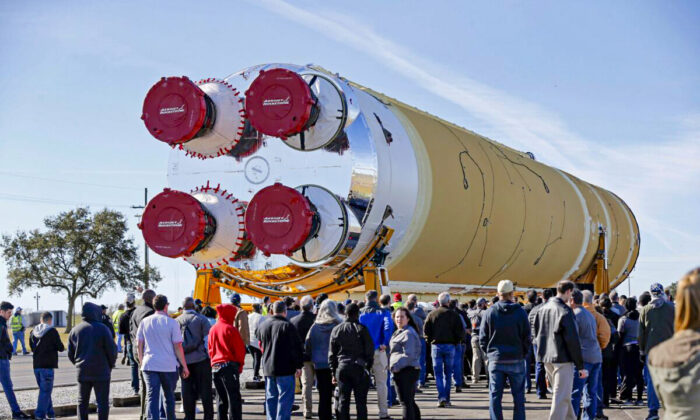 Employees and contractors watch as the core stage of NASA's Space Launch System rocket, that will be used for the Artemis 1 Mission, is moved to the Pegasus barge, at the NASA Michoud Assembly Facility where it was built, in New Orleans, La., on Jan. 8, 2020. (Gerald Herbert/AP Photo)
Space

NASA Administrator Talks Moon and Beyond

NASA Administrator Bill Nelson is looking forward to the first test flight of the Space Launch System rocket, and, later, the first manned flight to the moon in more than 50 years.

Nelson held a media briefing Tuesday ahead of the Crew-4 launch to the International Space Station.

Artemis 1 is a planned uncrewed test flight for NASA’s Artemis program and will be the first flight of the Space Launch System. Artemis 1 is expected to launch no earlier than June.