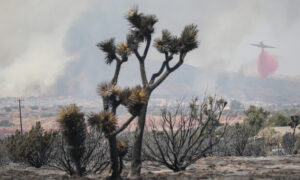 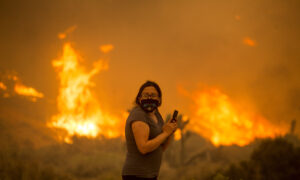 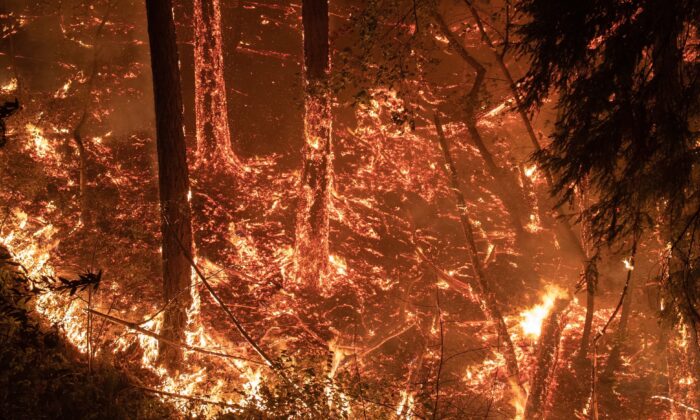 The Glass Fire burns along a hillside in Calistoga, Calif., on Sept. 28, 2020. (Adrees Latif/Reuters)
US News

CALISTOGA, Calif.—Firefighters in Northern California on Tuesday struggled to make headway against two wildfires, one of them threatening wineries and towns in the Napa Valley, and a second that killed three people closer to the Oregon border.

The three fatalities in the so-called Zogg Fire in Shasta County, about 200 miles (322 kms) north of San Francisco, were reported by the local sheriff.

All three were civilians, and their deaths brought to 29 the number of people killed since mid-August. This has been the worst year for wildfires in California’s history in terms of acreage burned.

Farther south, the Glass Fire was raging in wine country, having already destroyed a highly rated restaurant and buildings at a winery whose architecture was inspired by a 13th-century Tuscan castle.

Tens of thousands of people have been forced to evacuate, including nearly all 5,300 residents of Calistoga, a resort town known for its hot springs and mud baths.

“We still have high heat and low humidity that can spread large fires,” said Lynette Round, an information officer for the California Department of Forestry and Fire Protection, or Cal Fire.

Both fires were zero percent contained, Cal Fire said, though calmer winds could give firefighters an edge on Tuesday.

The Zogg fire has destroyed 146 structures and charred more than 40,000 acres of grassy hillsides and oak woodlands.

After merging with two other blazes, the Glass Fire had spread across 36,000 acres in Napa and Sonoma counties, incinerating around 95 homes and other buildings, according to Cal Fire.

Around three-quarters of a mile to the northwest, flames destroyed a farmhouse containing a trove of bottled wine and offices at the Castello di Amorosa winery, but its distinctive castle was intact, the San Francisco Chronicle reported.

To the east, the three-star Michelin restaurant, the Grill at Meadowood, and a golf shop were destroyed at the Meadowood Napa Valley resort, the newspaper reported.

In Calistoga, the evacuation left its main street, known for boutiques and tasting rooms, looking like a ghost town, according to a Reuters photographer.

The fires marked the latest flashpoints in a destructive spate of wildfires this summer across the Western United States.

California fires have scorched over 3.8 million acres (1.5 million hectares) since January—far exceeding any single year in state history. They have been stoked by prolonged bouts of heat and dry-lightning sieges that scientists attribute to climate change.

More than 7,000 homes and other structures have burned statewide this year.

An estimated 95,000 residents were under evacuation orders or advisories in California, with 30,000 from the Glass Fire and 2,200 from the Zogg, Round said.

Red-flag warnings for extreme wildfire risk were posted for much of Northern California.

By Adrees Latif and Stephen Lam