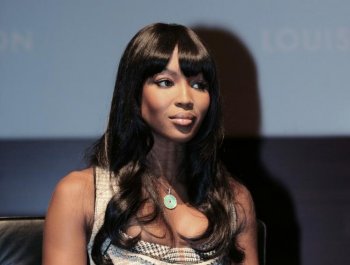 Naomi Campbell is seen seated on June 1, 2010 during the press presentation of a travel case made by Louis Vuitton. She testified at Charles Taylor's war crime trial in The Hague, Netherlands, saying she had received a pouch of dirty-looking stones after (Miguel Medina/AFP/Getty Images)
Europe

At the trial of Taylor, ex-Liberian president, Campbell said in her testimony that she received the stones late in the night after dinner. She said she was awoken by two unknown men knocking at her door, handing her a pouch of stones, saying only, “a gift for you.”

“I opened the pouch the next morning when I woke up … I saw a few stones in there, they were very small dirty-looking stones," she told the court according to BBC News.

"The next morning at breakfast I told Ms. Farrow and [her former agent Carole White] what had happened, and one of the two said, 'That's obviously Charles Taylor', and I said, 'I guess that was'."

Campbell says that she had previously denied that she had received the stones because she feared for her family.

A key factor in the prosecution of Taylor is his alleged use of ‘blood diamonds,' which were illegally mined in area's controlled by the rebel army, to arm the rebels during the Sierra Leone Civil War of 1991-2001.

Taylor is also accused of having trained and commanded rebels, who were known for cutting off civilians’ hands and legs.