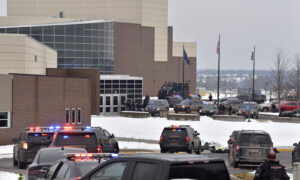 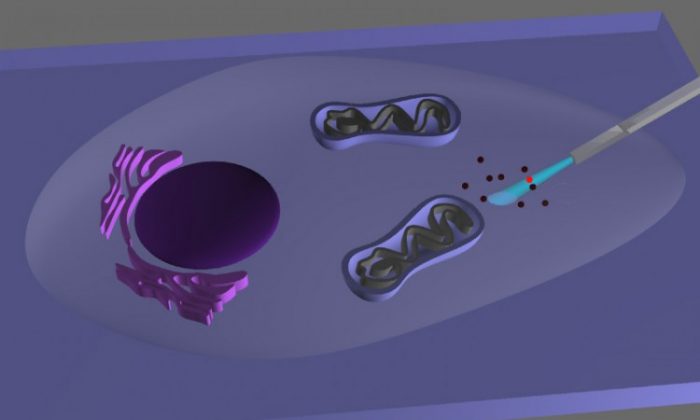 This schematic depicts the subcellular imaging of quantum dots in a living cell using a nanowire endoscope. (Courtesy of Berkeley Lab)
Science

Nanotechnology Shines a Light Inside Cells

Using nanotechnology, scientists have developed an optical probe that can be used to see inside living cells.

The nanowire endoscope, developed by researchers with the U.S. Department of Energy’s Lawrence Berkeley Lab and the University of California, Berkeley, is the first to be able to shine light inside a single cell.

It could also be used to deliver genes, proteins, or drugs into a cell without damaging it, say the researchers.

An endoscope is a type of medical instrument used to see inside the body and inside organs. It consists of a long flexible tube and a light source. Light is transmitted down the tube using an optical fiber system.

The nanowire endoscope consists of a tin oxide nanowire waveguide attached to the tapered end of an optical fiber. The nanowire is flexible and extremely strong, so it can withstand repeated bending.

“By combining the advantages of nanowire waveguides and fiber-optic fluorescence imaging, we can manipulate light at the nanoscale inside living cells for studying biological processes within single living cells with high spatial and temporal resolution,” said lead researcher Peidong Yang in a press release.

Visible light imaging has been used for decades by biologists to study cells. Fluorescent dyes can also be used to highlight certain cell components, such as proteins, nucleic acids, and lipids. But visible light imaging cannot be used to study tiny structures inside cells, due to resolution limits imposed by the physical properties of light.

Recently, scientists have developed ways to overcome these limitations using nanophotonics, but the systems are expensive, complicated, and bulky.

“By incorporating one of our nanophotonic components into a simple, low-cost, bench-top fiber-optical set-up, we were able to miniaturize our endoscopic system,” Yang said.

The researchers tested their system’s ability to image structures at the subcellular level by inserting the endoscope into human cells commonly used for laboratory research and shining blue light into the cells. They found that the probe didn’t harm the cells or cause the membrane to rupture.

“The optical output from the endoscope emission was closely confined to the nanowire tip and thereby offered highly directional and localized illumination,” Yang said.

Next they showed that it was possible to deliver “quantum dots”—a type of nanoparticle—into the cells with a great degree of accuracy. They attached the quantum dots to the end of the endoscope, and then released them using low-power ultraviolet light.

The quantum dots could be released in under a minute, significantly faster than other reported nanotube-based single-cell delivery systems, which take 20 to 30 minutes to deliver their cargo.

“In the future, in addition to optical imaging and cargo delivery, we could also use this nanowire endoscope to electrically or optically stimulate a living cell,” Yang said.

The research was published online in the journal Nature Nanotechnology on Dec. 18