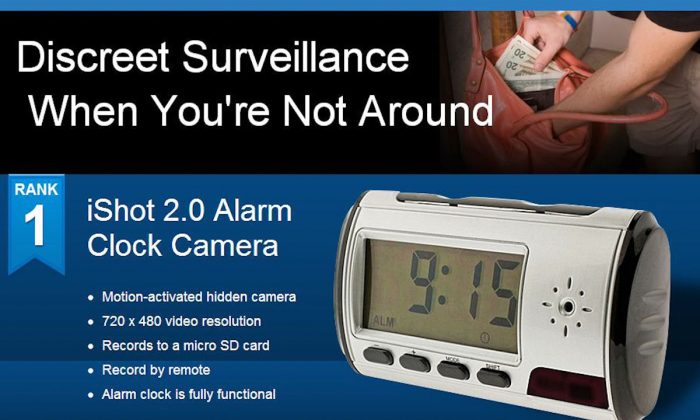 Nanny cam: A hidden camera in a New Jersey home led to the arrest of a burglar on Friday who brutally beat the home owner in front of her 3-year-old child. The so-called nanny cams are gaining popularity, raising the question of how taped evidence will hold up against privacy laws in court.

Nanny cams wear various disguises—a clock radio, the eyes of a teddy bear, a smoke detector, an electrical outlet, and other common appliances.

On Friday, 42-year-old Shawn Custis was arrested and charged with attempted murder, robbery, burglary, and child endangerment for an attack caught on a nanny cam in Millburn, N.J.

A man is seen entering the home, repeatedly punching and kicking the home owner and throwing her to the floor as her child cowers on the couch. He goes upstairs multiple times to rifle through the family’s belongings, returning to beat the woman and even throw her down the stairs. The names of the woman and child have been withheld.

In a separate case in February on Staten Island, New York, a nanny cam led to the arrest of 52-year-old Mamura Nasirova. Nasirova was seen slapping and shaking the 5-month-old baby in her care, according to ABC News. The camera was hidden in a carbon monoxide detector.

In August 2012 in Houston, Texas, 48-year-old nanny Tirza Magana was charged with child endangerment after a nanny cam caught her carrying her 7-month-old charge by the head and suffocating the child. Magana confessed to suffocating the baby several times a day for a month, according to the Huffington Post. The baby was behaving strangely, causing the parents to become suspicious.

In May 2012, Scott William Hone, 26, in Oshawa, Canada, was arrested on evidence provided by a nanny cam disguised as a clock radio, according to local publication Oshawa This Week. A mother, whose name has been withheld, had misgivings about leaving her 5-month-old daughter with her ex-boyfriend, Hone, the child’s father. The camera caught him handling the baby roughly as he changed her diaper, then throwing the screaming baby face-first onto the couch.

“He seemed unsure with them,” the mother told This Week. “I put it down to inexperience with kids.” She said when she saw the footage, “I was livid. … I just started crying. I couldn’t stop crying.”

A May 2013 posting on Find Law law blog explores the legality of this covert form of surveillance. Video-only nanny cams are legal in all states, provided the reason for use is sufficient. Voyeurism or the desire to gather personal information are not legally permissible reasons for surveillance.

“All individuals, including nannies, have a legally protected expectation of privacy,” states Find Law. “Legitimate reasons can include monitoring your baby and/or your babysitter to thwart child abuse, or to prevent theft.”

In some states, evidence garnered with the cameras may not be permissible in court. Some states require the nanny’s consent to being filmed. Many states are, however, leaning toward allowing the video evidence. In about 15 states, under wiretapping laws, audio recording is only legal with the consent of the party being recorded.

A 2002 UCLA Journal of Law and Technology article provides similar legal insight on the issue of nanny cams. It also explores the issue of secret surveillance versus overt surveillance. Not telling the nanny or babysitter that he or she is on camera, “raises the issue of what the cameras are really for—to protect children or to prosecute the offenders,” states the article.

“If a parent suspects abuse, the parent should advise the babysitter about a camera rather than installing one secretly. Otherwise, it seems that the parent is allowing the harm to happen, when he or she could have prevented it.”