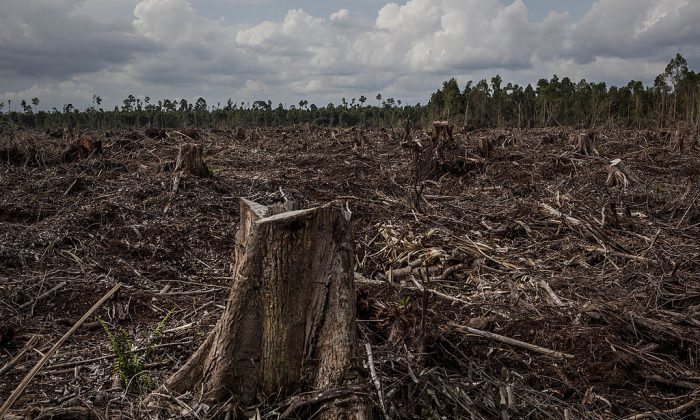 Stumps in a deforested area developed for a pulp and paper plantation in Sumatra, Indonesia, on July 11, 2014. (Ulet Ifansasti/Getty Images)
Asia & Pacific

A new online platform traces the funds from companies that destroy rainforests in Southeast Asia to the banks around the world that finance them.

The need for banks to adopt socially responsible policies on the environment is a topic of increasing interest in the financial sector. The platform was released on Sept. 6, timed to dovetail with the U.N. Principles for Responsible Investment (PRI) conference in Singapore, which runs Sept. 6–8.

Banks in Asia are the worst offenders for financing deforestation, but U.S. and European banks also contribute to the problem, according to the research that informed the new online tool.

The tool was developed by the Rainforest Action Network (RAN), in collaboration with the nongovernmental organization TuK Indonesia and consultancy firm Profundo. It looks at investments in palm oil, pulp and paper, rubber, and timber companies known for environmental degradation and human rights abuses in Southeast Asia.

Researchers at the University of Maryland determined in 2014 that Indonesia’s rate of deforestation was the highest in the world because of these industries. A study published in August by researchers at Duke University newly identified more than 200 species as being at high risk of extinction due to deforestation in the region.

The tool ranks banks on a scale of zero to 30, with 30 being the best for environmental and social responsibility related to forest-industry investments.

Banks in Malaysia and Indonesia, where the deforestation is largely taking place, all rated either zero or one out of 30. Chinese banks rated similarly. All three of the Japanese banks included rated 10/30.

Banks in Malaysia and Indonesia, where the deforestation is largely taking place, all rated either zero or one out of 30.

The best scores were received by Dutch banks ABN Amro (24/30) and Rabobank (23/30). To give an idea of the criteria on which RAN and its partners based the scoring, ABN Amro earned a high score for requiring clients to undergo regular independent assessments in relation to legality, social, and environmental issues; for having policies to specifically safeguard forests; for checking land tenure legality; and for being a signatory to the main international covenants relevant to forestry and land issues.

Citigroup was the best-scoring American bank, at 18/30. The tool’s summary for Citigroup reads: “[Citigroup is a] signatory to main international sustainability covenants and has an environmental and social policy, but will finance operations in sensitive forests and protected areas.” Citigroup invested about $540 million in forest-risk companies from 2010 to 2015.

The tool lists all the criteria on which the assessment was based for each bank; only a brief summary has been given here.

Morgan Stanley, which invested almost a billion dollars from 2010–2015, was the worst-scoring American bank, at 7/30.

Morgan Stanley, which invested almost a billion dollars from 2010 to 2015, was the worst-scoring American bank, at 7/30. The tool’s summary of Morgan Stanely reads: “[Morgan Stanley is a] signatory to U.N. PRI and has basic environmental and social policies, but will finance operations in sensitive forests and protected areas.”

Although the number of U.N. PRI signatories has increased sharply in the past decade, evidently groups like RAN consider this inadequate on its own to ensure responsible investing.

Banks are only one of the large industries responsible for deforestation and human rights abuses in rainforest communities, but they do wield considerable power for change. The investments examined by RAN total $38 billion.