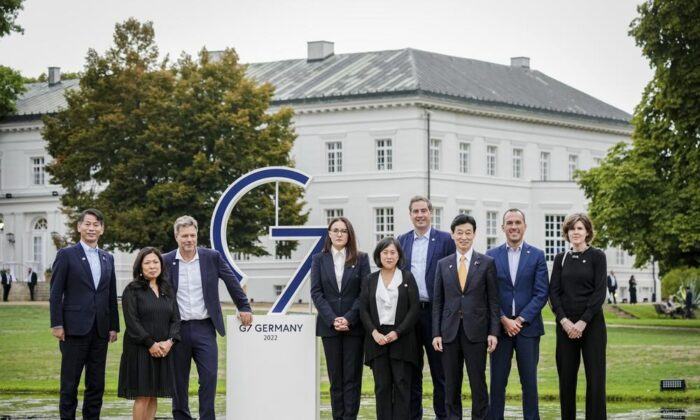 ‘Naivety Toward China Is Over’: G7 Nations to Take Tougher Stance on China Trade

G7 Trade Ministers have said they will take a tougher stance on China over trade, after a two day meeting at Neuhardenberg Palace in East Berlin, Germany, on Sept. 15. Experts believe the change is because the countries have become increasingly alert to the Chinese regime’s aggressive behavior towards the international community.

German Minister for Economic Affairs and Climate Protection Robert Habeck told reporters after the meeting that the G7 have agreed to take a tougher and more coordinated stance against Beijing on trade, as that “naivety toward China is over.”

“The time when one said ‘Trade, no matter what,’ regardless of social or humanitarian standards, is something we shouldn’t allow ourselves anymore,” Habeck said.

Harbeck also said that Germany will persuade the EU to formulate “a more robust trade policy toward China and respond as Europeans to the coercive measures that China takes to protect its economy.” He believed “the other partner countries will do exactly the same.”

The G7 members include the United States, Germany, the United Kingdom, Canada, France, Italy, and Japan. Germany currently holds the presidency, which rotates among G7 members.

Dr. Su Tzu-yun, director of the Institute of National Defense and security research divisions of the National Defense Academy of Taiwan, told to The Epoch Times on Sept. 16 that Habeck’s speech is based on Germany’s clear realization of the Chinese Communist Party’s (CCP) military expansion and its wolf warrior diplomacy that attempt to play the victim card. “Secondly, no more naivety means that Germany is to abandon the appeasement policy of the Angela Merkel’s era.”

Former German Chancellor Angela Merkel was often accused of taking a “friendly trade policy” toward China and not being tough enough on China’s human rights abuses when she was in power. German statistics show that by the end of 2021, China had been Germany’s largest trading partner for six consecutive years.

Su added that Germany has depended on Russia for energy and depended on China for trade. After Russia’s invasion of Ukraine in February, the West placed sanctions on Russia while Russia has cut energy supply to Western Europe in retaliation. Germany has learned the lesson [not to trust the regime] the hard way, and has clearly adjusted its strategic direction, Su said.

Habeck also urged that Europe should not support the Chinese regime’s “One Belt, One Road” economic initiatives, which would allow Beijing to acquire more of Europe’s strategic infrastructure and exert influence on European trade policy. He also advocated for stricter scrutiny of investments by China-based companies in Europe, and opposed Chinese state-owned company COSCO Shipping’s acquisition of Hamburg’s container terminal “Blessed Land.”

Urgency to Link Human Rights and Diplomacy with Trade

G7 trade ministers went on to issue a joint statement following the Berlin meeting. Without naming China, it expressed concern about “unfair practices, such as all forms of forced technology transfer, intellectual property theft, lowering of labor and environmental standards to gain competitive advantage, market-distorting actions of state-owned enterprises, and harmful industrial subsidies, including those that lead to excess capacity.”

The statement also pledged to continue to seek reform of the World Trade Organization, to which China was granted membership in 2001.

Lee Cheng-hsiu, a researcher at the National Policy Research Foundation in Taipei, told The Epoch Times on Sept. 16, “In the past, they only complained and verbally protested about the illegal practices of Chinese companies, but there was no real countermeasure. However, in recent years, the CCP has become more and more aggressive in international community, using their economic and trade advantages to pressure smaller countries, including some former communist countries in Central and Eastern Europe. The West can’t tolerate it anymore.”