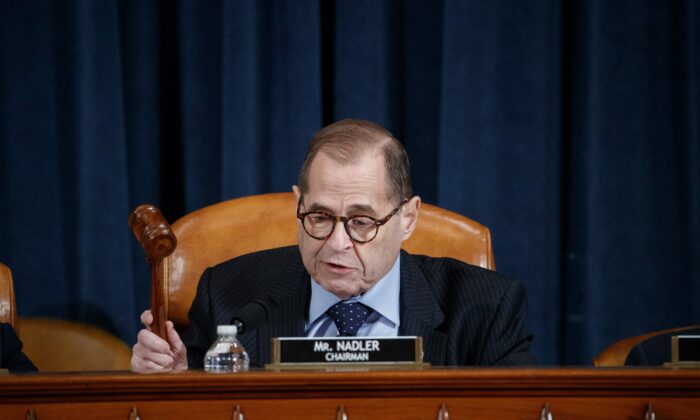 Rep. Jerrold Nadler (D-N.Y.), the chairman of the House Judiciary Committee, missed a procedural impeachment vote in the House Rules Committee on Tuesday.

The panel is expected to advance two articles of impeachment against President Donald Trump for the full House vote on Wednesday.

Aides to the longtime lawmaker told Politico that he is expected to return on late Tuesday or Wednesday before the impeachment vote. Rep. Jamie Raskin (D-Md.), another member of the Judiciary Committee, filled in for him.

According to The Hill, Nadler’s wife, Joyce Miller, is ill. He is away from Congress at the moment.

The entire chamber is expected to cast a final vote on the articles on Wednesday, and they’re expected to pass along a party-line vote.

The Rules Committee is the last stop in the process before the two articles head to the floor. They will set the terms of the floor debate.

“It’s unfortunate that we have to be here today, but the actions of the president of the United States make that necessary,” he said in the hearing. “The evidence is as clear as it is overwhelming.″

Republicans disagreed with his assertion.

The top Republican on the committee, Rep. Tom Cole (R-Okla.), noted that recent polls show that at least half of Americans oppose impeaching Trump. “When half of Americans are telling you what you are doing is wrong, you should listen,” he said.

The two articles of impeachment alleged Trump abused his power and obstructed Congress over his dealings with Ukraine. They accused Trump of withholding military aid to Kyiv in exchange for politically advantageous investigations.

Trump again denied the claims (pdf) in a six-page letter to House Speaker Nancy Pelosi (D-Calif.), where he accused the Democratic caucus of subverting Democracy.

Trump, meanwhile, accused Democrats of interfering in the 2020 election.

“Any member of Congress who votes in support of impeachment—against every shred of truth, fact, evidence, and legal principle—is showing how deeply they revile the voters and how they truly detest America’s Constitutional order,” he wrote.

In Wednesday’s vote, House Democrats need a simple majority to impeach the president. As of Tuesday afternoon, it appears that House Democrats have enough votes to pass the two articles after a handful of on-the-fence Democratic representatives said they would vote for impeachment in recent days.