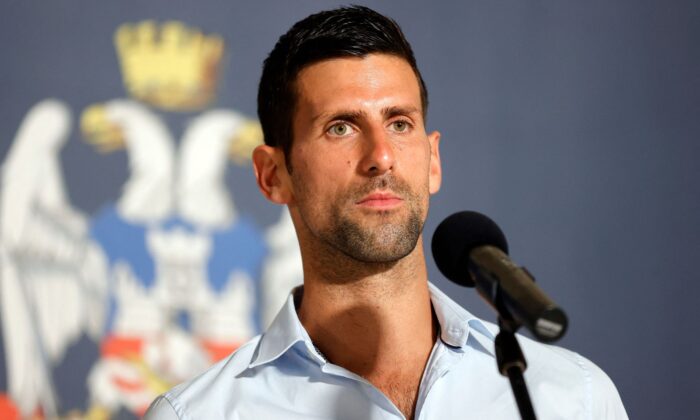 Serbia's Novak Djokovic speaks during a press conference after attending his welcoming ceremony celebration at the Belgrade City Hall in Belgrade on July 11, 2022. (Pedja Milosavljevic/AFP via Getty Images)
Tennis

NEW YORK—Rafa Nadal said it was sad news that his great rival Novak Djokovic will be missing from the U.S. Open, adding that the absence of a player of the Serbian’s calibre was an important miss for the hardcourt Grand Slam.

Djokovic, who won Wimbledon to take his major singles titles to 21, has opted not to be vaccinated against COVID-19. He said on Thursday he could not fly to New York for the year’s final Grand Slam.

Rules require travelers to show proof of vaccination to board flights to enter the United States.

“It’s always a shame when the best players of the world are not able to play a tournament because of injuries or because of different reasons.

“In this case, not having one of the best players of the history in the draw of Grand Slam is always an important miss, no?”

The 35-year-old Djokovic was also unable to play the Australian Open at the start of the year after being deported from Melbourne over his vaccination status just ahead of the tournament.

Nadal said it was tough for both players and the fans as everyone wants the best players to compete at big events.

“But on the other hand, I repeat what I said plenty of times: the sport in some ways is bigger than any player,” added the 36-year-old, who has been plagued by injuries during the last two seasons. “The tournament continues.

“Even if it’s not a good news for everyone, the world continues and tennis will continue after me, after Novak, after Roger (Federer).

“Without a doubt, Novak is one of the most important players of the last 20 years, the history of our sport. In a personal way I feel sorry for him that he’s not able to travel here.”

World number one Daniil Medvedev said he was disappointed his U.S. Open title defense at Flushing Meadows would kick off without Djokovic.

The lanky Russian pulled off one of sport’s greatest upsets with cat-like agility a year ago when he denied Djokovic a calendar Grand Slam in a straight sets win on Arthur Ashe Stadium to collect his first major title.

“I wish he would play here,” Medvedev told reporters ahead of the U.S. Open main draw, which starts on Monday.

“The rivalry against Rafa is really I feel like heating up in a way. Twenty-two, 21 (Grand Slams), a joke of a number,” he said.

“It’s a pity he (Djokovic) is not here. It would be a great story I think for tennis. Not only tennis-wise, but it’s not us tennis players, it’s American government rules. Completely understandable also.”

Medvedev rolls into the U.S. Open after a handful of uneven performances, winning at Los Cabos before suffering a shock early exit in Montreal. He reached the semi-finals at Cincinnati, where he has often thrived.

His hunger for a second major title is as fierce as ever after losing a five-set thriller to Nadal in the Australian Open final. The six-foot six-inch, power-serving Russian said he wanted to try “something big” in New York.