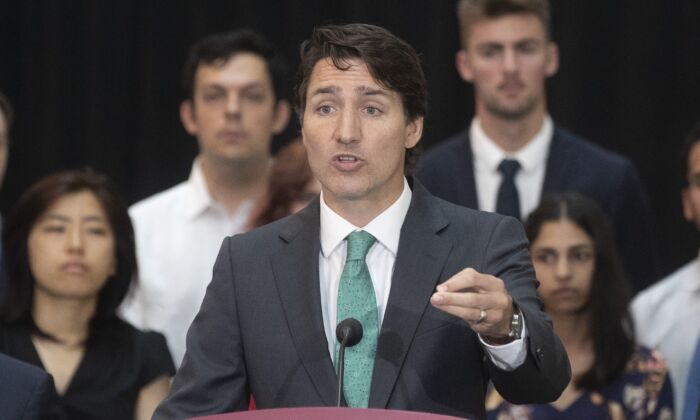 Prime Minister Justin Trudeau waded into the freedom of expression debate on July 13 as he addressed Radio-Canada’s decision to appeal a CRTC ruling requiring it to apologize publicly for saying the “N-word” in a radio program.

“It’s extremely important to underline that defending freedom of expression, defending journalistic independence and integrity, is always going to be a foundation not just of Canada, but of any strong democracy,” Trudeau said during a press conference in Kingston, Ontario.

“At the same time, there are words that carry deep, deep historical and current weight to them, cause harm,” he said, adding that we need to “make sure … we’re avoiding perpetuating deep societal injustices and crimes.”

The hosts of the program on the state broadcaster Radio-Canada (French CBC) mentioned the “N-word” in August 2020 in the context of discussing the essay “Nègres blancs d’Amérique” by Quebec Marxist and separatist Pierre Vallières.

The essay was written by Vallières in the late ’60s after he spent time with the Black Panther Party in New York City and while being incarcerated there with mainly black people. Vallières sought to draw parallels between the plight of Quebecers in Canada and blacks in the United States.

Radio-Canada announced its decision to appeal the Canadian Radio-television and Telecommunications Commission (CRTC) decision in a July 13 statement.

It says that the “N-word” is a “hurtful and racist insult” and must be contextualized when used on rare occasions. The broadcaster also said it will apologize to the person who made the initial complaint and put a warning on the controversial program.

But Radio-Canada said it was not taking these steps because of the CRTC, but rather because it’s the “right thing to do.”

Radio-Canada claims that the CRTC overstepped its mandate, and its decision represents a “threat because the Council is trying to give itself the power to compromise journalistic independence.”

The issue stems from an individual initially complaining to Radio-Canada about the “N-word” being used on the radio program, which was discussing the attempt to cancel a Concordia University professor who had mentioned Vallières’s essay in class.

Radio-Canada’s ombudsman said in October 2020 that the broadcaster did not breach journalistic standards, which led to the individual filing a complaint with the CRTC in November 2020.

In a June 29 decision, the CRTC ruled that Radio-Canada’s program went “against the Canadian broadcasting policy objectives and values set out” in the Broadcasting Act.

Radio-Canada “did not implement all the necessary measures to mitigate the impact of the ‘N-word’ on its audience, particularly in the current social context and given its national public broadcaster status.”

Two dissenting opinions were attached to the decision.

“In this case, neither the Canadian Charter of Rights and Freedoms … nor the applicable broadcasting provisions protect the complainant’s right to not be offended,” wrote vice-chair of broadcasting Caroline J. Simard.

Vallières’s essay, run-of-the-mill late-sixties hard-left material, has caused other controversies with the new progressive left due to its title.

Long-time CBC journalist and host Wendy Mesley got in trouble for referencing the book in an editorial meeting. She also used the “N-word” in another context. This led to her suspension by CBC in June 2020 and the cancellation of her show “The Weekly.”

Around the same time frame, some Concordia University students sought to have a professor stripped of a teaching assignment for mentioning the essay title in class months earlier.

These events took place a few weeks after the murder of George Floyd in Minneapolis.

Film professor Catherine Russell was not suspended by the university, nor was the “N-word” banned. University management instead opened a dialogue with students who suggested ideas to address related issues on campus.

Russell issued an apology to the students in her class in July 2020, using key social justice concepts.

“As a white teacher, I am very much in a position of privilege and power and I clearly need to do better for all students to feel more respected in the classroom, and especially for BIPOC [Black, Indigenous, and People of Colour] students to feel that they are in a safe space.”